I'm sorry to say, but, there's never going to be a Nintendo Switch Pro. It's not happening. You can stop wishing for it, because a Switch Pro is absolutely, 100 percent not in Nintendo's plans. Not now and not ever. Right? RIGHT?? Well, okay maybe there won't be a Switch Pro. This is one of those rumors that just refuses to die, and some key references contained in data that was recently plundered from NVIDIA have people talking about the elusive console once again.
Switch Pro rumors have persisted for quite some time, leading up to the launch of the Switch OLED, which is what we ultimately got instead. The Switch OLED brought with it an improved display and twice the built-in storage, but not an overhaul of the underlying the hardware that might have been able to deliver a 4K gaming experience.
Then in late September of last year, Nintendo addressed the rumors head on saying beyond the then-upcoming Switch OLED, it has "no plans for any new model." Nintendo made the clarification for the benefit of its investors following a news report that an upgraded Switch with 4K support was incoming, a report Nintendo said was false.
So why are we still talking about it? Well, Nintendo also mentioned (separately) that the Switch (which has sold 100 million units to date) is the middle of its lifecycle. One could surmise there's still room to release yet another variant (following the original Switch, a slightly upgraded Switch with an IGZO display and better battery life, the Switch Lite lineup, and the Switch OLED). Then came the data breach at NVIDIA. 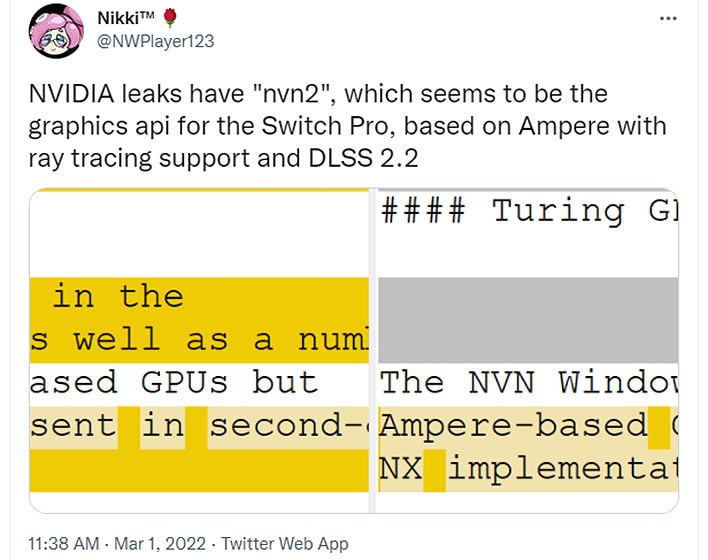 As spotted by Twitter user @NWPlayer123, there are some interesting details that could possibly point to a hardware refresh for the Switch Pro. It starts with "NVN2" entries that are believed to reference the graphics API for the non-existent Switch Pro, followed by other revelations posted in the accompanying Twitter thread. For reference, "NVN" was the codename for the original Switch's graphics API.

Call it a Switch Pro or a Switch 2, or whatever you want, but the details do seem to hint that an upgraded handheld was at least considered at some point. These appear to be older files and plans could have change, because of the component shortage or any other reason. But it's interesting all the same.
Those entries further suggest that an upgraded Switch console would offer support for both real-time ray tracing and NVIDIA's Deep Learning Super Sampling (DLSS) technology, probably in conjunction. Supporting those features would require new and more powerful guts. To that end, there are also references to NVIDIA's T234 and T239, the former of which relates to NVIDIA's Orin SoC. It was previously rumored that the T239 would be a customized variant for a Switch Pro console.
We've all heard the saying that where's there is smoke, there is fire. The trouble is, by the time you track down the smoke, the fire might already be extinguished. That's definitely a possibility here. Supposing these leaked files are indicative of Switch Pro hardware, as some have surmised. It doesn't mean those plans were ever finalized.
Still, for anyone holding onto a glimmer of a hope that a Switch Pro will ultimately materialize, this will keep those hopes alive a little longer.