We've heard plenty of rumors about the alleged Nintendo Switch Pro in the past few weeks, with the most recent information suggesting the console could be revealed in the days leading up Nintendo Direct event at E3 2021.

Today, we're getting a bit of insight into what SoC could be inside the Switch Pro to give it the power necessary to tackle more graphically intense games with NVIDIA Deep Learning Super Sampling (DLSS) enabled. According to reliable NVIDIA leaker Kopite, the SoC for the Switch Pro carries the internal designation T239. For reference, the Tegra X1 SoCs found in the original and refreshed Switch consoles are referred to as T210 and T214, respectively.

This is a preliminary picture of T234 in Wikipedia. Very clear.
So why do we always guess?
Nintendo will use a customized one, T239. pic.twitter.com/Qp5Im5udlQ

T234 allegedly references NVIDIA's Orin SoC, which would make the Switch Pro T239 a close relative. However, we must mention that Orin reportedly has up to 2048 [Ampere] CUDA cores depending on the configuration, with a TDP of around 65 to 75 watts. Nintendo would have to use a cutdown version of Orin to hit the 15-watt TDP of the existing Tegra X1+ SoC.

Given that the Tegra X1 uses Cortex-A57 CPU cores along with a Maxwell-based GPU, the Cortex-A78AE/Ampere combo of Orin should offer a significant uplift in performance for the Switch Pro. With this kind of firepower at hand, the rumored DLSS support will reportedly render 1080p content at close to 4K quality levels [in docked mode] without a significant performance hit. However, it's reported that DLSS can't easily be added to existing games and will likely only be present in future games announced for the platform. 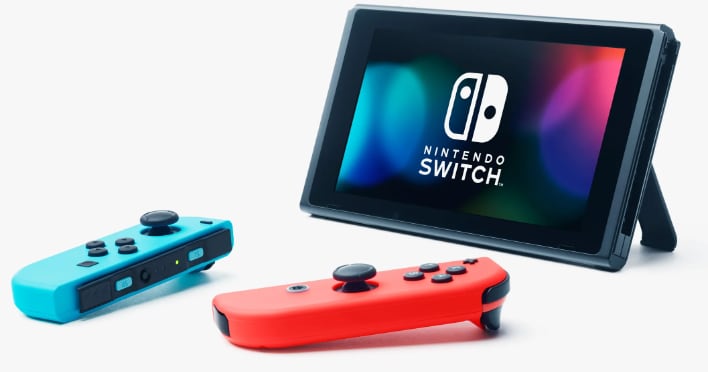 Other specs reportedly on deck for the Switch Pro include a 7-inch OLED display, which is an upgrade from the current 6.2-inch LCD and a revised dock. It is rumored that the Switch Pro will carry roughly the same form-factor as its predecessor but will have slimmer display bezels. Current generation Joy-cons will be compatible with this newer console, and we should expect additional improvements in battery life.

Nintendo's E3 2021 "Direct" event is scheduled for June 15th, so we're eager to see what's in store for the Switch Pro. If the rumors are accurate, the Switch Pro will launch priced at around $349 versus the $299 asking price of the current Switch.