In a recent Twitter post, Nintendo sought to make one thing abundantly clear to investors and the public large—it has no current plans to launch a Switch console beyond the upcoming Switch OLED refresh, and that definitely includes an oft-rumored 4K model with upgraded hardware. It is just not in the cards, if Nintendo is to be believed.
For the most part, the Switch is the same console now as it was when it first launched in 2017, when we reviewed the original Switch. There have been some minor alterations since then, including a refresh in 2019 that improved battery life, and a Switch Lite that is smaller and lighter (without detachable controllers).  But most of the core hardware and capabilities have remained the same, and that is true of the upcoming OLED model—it will have a higher quality display and double the storage, but the same resolution powered by the same SoC.
Meanwhile, both Microsoft and Sony launched massively upgraded gaming consoles last year, the Xbox Series X|S and PlayStation 5, respectively. Both are hanging their hats on 4K gaming (save for the Xbox Series S) capabilities, among other amenities (like variable refresh rate support and much faster solid state drive storage).
The Switch never competed with Xbox and PlayStation consoles in terms of the spec sheet, and has sold exceptionally well anyway. It's about the games, the IP (iconic characters and franchises like Super Mario, Donkey Kong, and Zelda), and the unique capabilities, including the handheld form factor. So what's this talk about 4K?
It's been a rumored upgrade for quite some time, and more recently, Bloomberg published a report claiming that Nintendo supplied at least around a dozen developers with a Switch toolkit supporting 4K resolution gaming. The report is based in part on conversations with anonymous employees at 11 different companies, both large and small. One of them is said to be Zynga, which has never made a console game.
A spokesperson for Zynga refuted the report, and now so has Nintendo in what amounts for a forceful denial on Twitter. 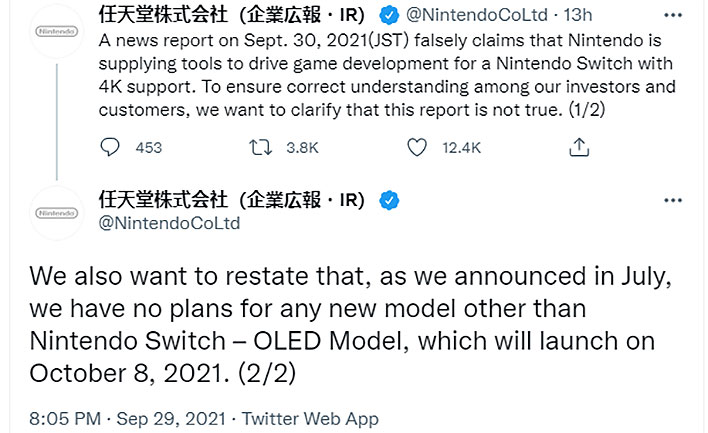 "A news report on Sept. 30, 2021 (JST) falsely claims that Nintendo is supplying tools to drive game development for a Nintendo Switch with 4K support. To ensure correct understanding among our investors and customers, we want to clarify that this report is not true," Nintendo said.
Nintendo went on to say there are "no plans for any new [Switch] models" other than the OLED refresh that launches just over a week from now, on October 8. Case closed, right?
It's hard to tell. Let's assume for a moment that there is a 4K Switch on the roadmap, and let's say it is bound for release late next year, as is stated in the aforementioned report. The last thing Nintendo would want to do is draw attention to a more enticing upgrade when it has a refresh launching to much anticipation in short order.
On top of that, the report is supposedly based on more than just one or two sketchy sources, but from employees at 11 different game companies. Are they all lying or misinformed? That seems unlikely, though it is not out of the realm of possibility.
It is also possible that Nintendo had planned at some point to release a 4K Switch, but that the component shortage threw a wrench into things. So, perhaps it is biding its time with an OLED model before, say, an upgraded Switch 2 or Switch Pro comes along.
There are multiple possibilities. The one that Nintendo is officially rolling with is there are no plans to launch a 4K Switch, plain and simple. Do you buy it? Let us know your thoughts in the comments section below, or join us on Discord to discuss it (and other topics).