A generational leap in console hardware should facilitate a generational leap in gaming graphics, should it not? And the PlayStation 5 is certainly a big upgrade over the PlayStation 4, the same of which can be said of the Xbox Series X/S versus the Xbox One X. I bring up the PS5 specifically, though, because someone posted a video comparing the gameplay graphics of NBA 2K21 on the PS5 and PS4.
This is made easy because 2K Sports launched NBA 2K21 on the current-generation consoles first, since the next-gen hardware does not arrive until the middle of next month. And overall, it looks pretty good on today's consoles. But the trailers for the version built for next-gen consoles, including a recent gameplay reveal, have cranked the hype dial to 11.
Let's start with the official gameplay reveal, seen below...

The footage in the gameplay reveal was captured on a PS5, giving "the first true look at what gamers can expect on next-generation consoles this November," the developer states. And quite frankly, it looks amazing. Players have never appeared so detailed—you can make out realistic looking sweat beads running down Steph Curry's forehead, and realistic lighting and reflections bouncing off the hardwood.
I've been a fan of the NBA 2K franchise for a long time (minus the heavy emphasis on virtual currency—ugh), and if this video is truly representative of the overall experience, next-gen console owners are in for a treat. But are they really? I believe so, based on a comparison video posted by BBallCreatore 2K .Check it out...
You can argue that the graphics upgrade might not be exactly what you would expect from a full generational leap in hardware, but that is being awfully critical. Plain and simple, the game looks markedly better on the PS5 than the PS4 to my eyes, based on the above comparison video.
The players and backgrounds (like the crowd) are sharper and more in focus, and everything is more detailed. We can especially see this in the side-by-side character models, like the one of Klay Thompson at the top of this article. He actually looks pretty good on the PS4, but next to the same character model on the PS5, the graphics are almost crummy in comparison. 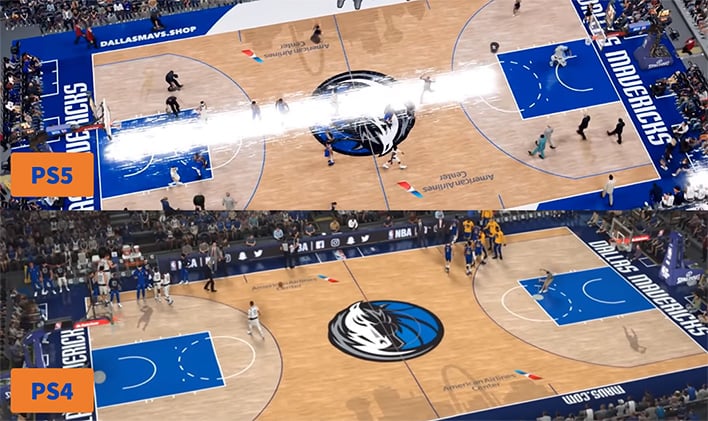 Lighting on the court looks much better, too. Start at the 30-second mark, we can an overhead view of the Dallas Mavericks court, which appears brighter and more vibrant on the PS5, with a sleek runway of lighting extending down the center of the floor.
I'm not alone in appreciating the visual upgrade. A user on Reddit who claims to be a 3D modeler and texture artists working in film and games called to attention some of the design elements, like using "real thick polygonal geometry for the net" on the PS5, along with "thousands of polygons used to deform the cloth sim while also creating ambient occlusion where the contact."
"The PS4 version uses flat 'cards' to save polygons. There is no thickness and only uses opacity alpha maps instead of modeling each strand. The power of the PS5 also gives more room for realistic imperfections and welding, as well as higher res textures on 'insignificant' non-hero assets," the user says.
There is a caveat, and that is cost. Some of the games that have been optimized for the PS5 and Xbox Series X/S cost more than their PS4 and Xbox One X counterparts, which is something Sony Interactive Entertainment CEO Jim Ryan recently justified in an interview.