The thought of an asteroid hurtling through space, slamming into Earth and annihilating humankind has enamored the imagination of more than a few filmmakers and astronomers through the years. Well, NASA has been thinking about the possibility too, and may have a plan to try and avert any such disaster.

When someone thinks about NASA and a plan to divert a massive asteroid from crashing into Earth, the image of astronauts drilling holes into the space rock itself to place explosives may come to mind thanks to Hollywood. But the true to life plan that has been devised is much less theatrical and a whole lot more practical. And NASA is close to launching it for its first in-space test run.


The cleverly named Double Asteroid Redirection Test (DART) is scheduled to launch on November 24th aboard a SpaceX Falcon 9 rocket from the Vandenberg Space Force Base in California. The project is part of NASA's planetary defense system and is aimed at redirecting an asteroid away from Earth by slamming a large spacecraft into its surface and altering its path. 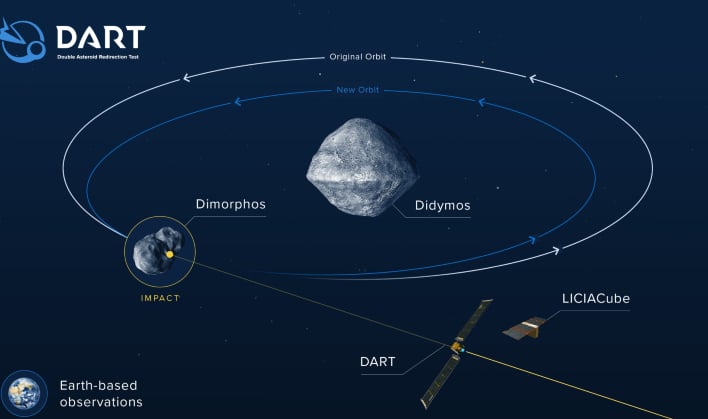 DART will launch from Earth and then travel for roughly a year through space until it reaches its intended target, Dimorphos (Greek for "two forms"). Dimorphos orbits a larger asteroid named Didymos (Greek for "twins").  The Didymos system was chosen by NASA because of how far away it is from Earth (not quite as far as the recently discovered exoplanet) and in that it poses no threat even after the spacecraft crashes into Dimorphos at a speed around 15,000 miles per hour. While the system is far enough away to be a safe target, it is still near enough for scientists to measure any change in the orbit of Dimorphos with ground-based telescopes.


Dimorphos has a diameter of 160 meters or 525 feet, while its larger counterpart Didymos has a diameter of 780 meters or 0.48 miles. The Didymos system is an eclipsing binary viewed from Earth. Essentially this means that the orbiting Dimorphos passes in front of and behind Didymos as viewed from our own humble rock. This allows scientist to measure the variation in brightness of the combined system to determine the orbital path of Dimorphos. This same technique will be used after DART crashes into its surface to determine if it had any effect on its orbital path. The timing of the mission was chosen in order to minimize the distance between Earth and Didymos to ensure the optimal quality of telescopic observation. 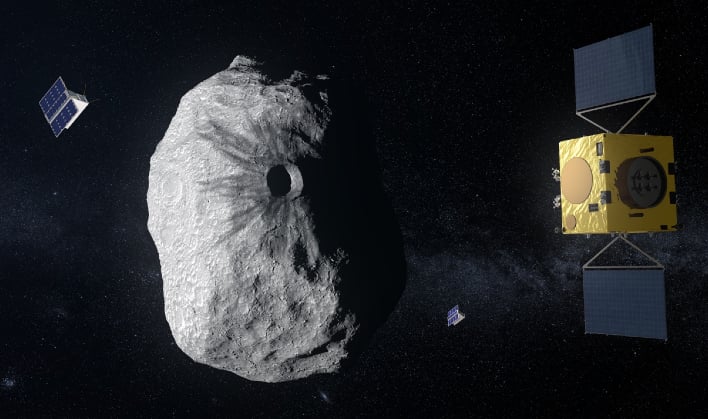 While this may sound like it could go terribly wrong, NASA has given it a tremendous amount of consideration. The impact of DART will be minimal in that it will not disrupt the asteroid, but still enough so that scientists can measure the slightest change in its orbit around Didymos. All of this information can then be transferred to a much larger impact on an asteroid that has a path toward Earth at some point in the future if ever needed.

NASA has scheduled a media briefing at 1 pm ET today to preview the upcoming launch of DART. It will cover its technology and plans of sending the spacecraft into the surface of Dimorphos, as well as what it hopes to glean from all of the data that will come from it. You can check out the briefing via the NASA app, the agency's website, and on NASA's Twitter account.

Most scientist do not believe the next few generations of humans will ever have to worry about such a threat. But if an asteroid ever does take aim on planet Earth, it's nice to know NASA has a plan that doesn't involve sending Bruce Willis into space (hopefully).