Figuring out how the planets formed in our solar system billions of years ago is one of many questions that still perplexes modern science. To try and answer this question, NASA has now launched a nearly $1 billion, 12-year-long mission deep in our solar system near Jupiter to look at the the Trojan asteroids. These are thought to be early remnants of our solar system and could provide crucial answers to finding out how we came to be.

Earlier this morning, the Lucy probe, named after the fossilized remains of a human ancestor found in Ethiopia in 1974 rather than The Beatles’ song, blasted off from Cape Canaveral. According to the NASA press release on the mission, this is the beginning of a 4-billion-mile trip to visit two "Trojan asteroid swarms" that are associated with, but not close to, Jupiter.

These asteroid groups, of which seven individual asteroids will be visited, are thought to be comparable in size to the main Asteroid belt and could hold the keys to revolutionizing "our knowledge of planetary origins and the formation of the Solar System, including the Earth."
To get there, the Lucy probe and launch vehicle will be using three Earth gravity assists in October 2022, December 2024, and December 2030 to slingshot the vehicle towards its targets. This timeline also includes a quick visit with a main asteroid belt target called Donaldjohanson, named after the discoverer of the Lucy fossil. 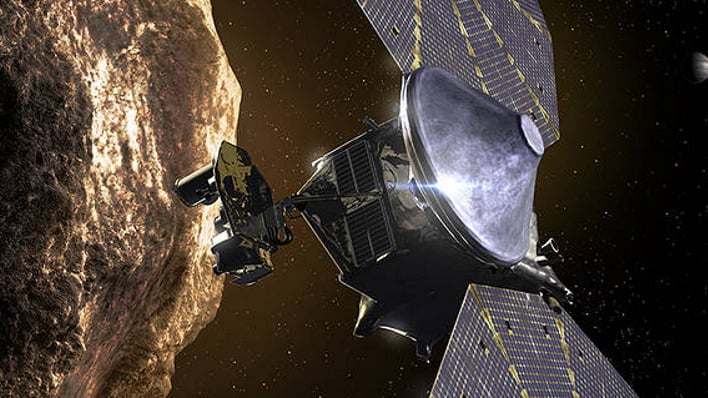 By the end of the mission in 2033, "Lucy will have visited a record number of destinations in independent orbits around the Sun," and hopefully completed the primary scientific goals. Furthermore, the hope is that Lucy will have a stable enough orbit to visit Trojan swarms repeatedly for thousands or millions of years to come.

Hopefully, the equipment, such as the Thermal Emission Spectrometer with its diamond beam splitter carrying a diamond into the sky (PDF) , will be able to last that long in the void of space. Besides the scientific value of the probe, though, Lucy also has a time capsule with a golden plaque which may be found one day as a note of our early space exploration. For now, Lucy's parts only need to last 12 years, so Godspeed Lucy and best of luck on your long trip.