A blazar consists of a supermassive black hole munching off material whirling around it in a disk. This can produce two powerful jets perpendicular to the disk on each side. The powerful jet of high-speed particles is particularly bright because it points directly at Earth. For decades, astronomers have pondered what caused these particles to reach such high energies. Now, NASA's IXPE has helped solve the mystery.

"This is a 40-year-old mystery that we've solved," remarked Yannis Liodakis, lead author of the study recently published in the journal Nature, and an astronomer at FINCA, the Finnish Centre for Astronomy with ESO. "We finally had all of the pieces of the puzzle, and the picture they made was clear." 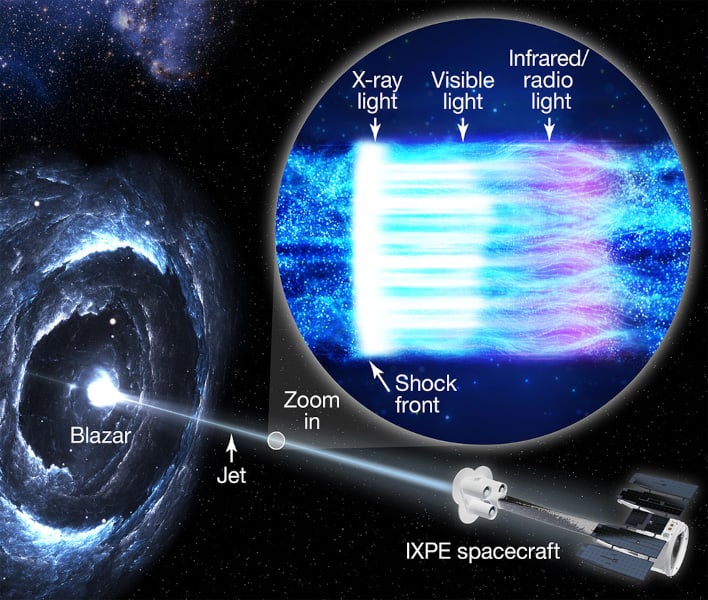 IXPE, a joint mission between NASA and the Italian Space Agency, provides what is described as "a special kind of data that has never been accessible from space before." The data includes the measurement of X-ray light's polarization. In other words, it detects the average direction and intensity of the electric field of light waves that X-rays consist of.

"The first X-ray polarization measurements of this class of sources allowed, for the first time, a direct comparison with the models developed from observing other frequencies of light, from radio to very high-energy gamma rays," explained Immacolata Donnarumma, the project scientist for IXPE at the Italian Space Agency. "IXPE will continue to provide new evidence as the current data is analyzed and additional data is acquired in the future."

The source of the new study is Markarian 501, a blazar in the constellation Hercules. IXPE observed Markarian 501 for three days in early March of 2022, and then again two weeks later. During the time IXPE was observing Markarian 501, scientists also utilized other telescopes in space and on the ground in order to gather information about the blazar in a wide range of wavelengths of light. This was the first time that scientists were able to gain this perspective on a blazar's X-rays.

The study concluded that X-ray light is more polarized than optical. However, the direction of the polarized light was the same for all the wavelengths of light seen and was also in line with the jet's direction. This led researchers to come to the conclusion that a shock wave accelerates the jet particles.

"As the shock wave crosses the region, the magnetic field gets stronger, and energy of particles gets higher," stated Alan Marshcer, an astronomer at Boston University who leads the group studying giant black holes with IXPE.