NASA has received the first image from its Imaging X-Ray Polarimetry Explorer (IXPE) since its launch in December of last year. The spectacular image shows the remains of a star that exploded in the 17th century, and it looks like a purple fireball hovering in space.

IXPE launched on December 9th of last year with the intention of capturing images of the most extreme and mysterious objects in the universe. NASA hopes to use the space observatory to learn more about high energy objects like supernova remnants and supermassive black holes. The first target IXPE set its sights on was Cassiopeia A, an object that is made up by the remains of a centuries old exploded star.

Cassiopeia A has been studied by other telescopes in the past, but researchers are able to study the deep space object in a new way with IXPE. The supernova remnant consists of shock waves from the exploded star that have swept up surrounding gas. This has created a cloud that glows in X-ray light.

The image below includes images from both IXPE (shown in magenta) and Chandra (shown in blue). Utilizing both IXPE and the Chandra X-Ray Observatory, NASA is able to capture different levels of angular resolution, or sharpness. Chandra's X-ray imagery unveiled a compact image in the center of the supernova remnant for the first time after its launch in 1999. Researchers believe it could be a black hole or a neutron star. 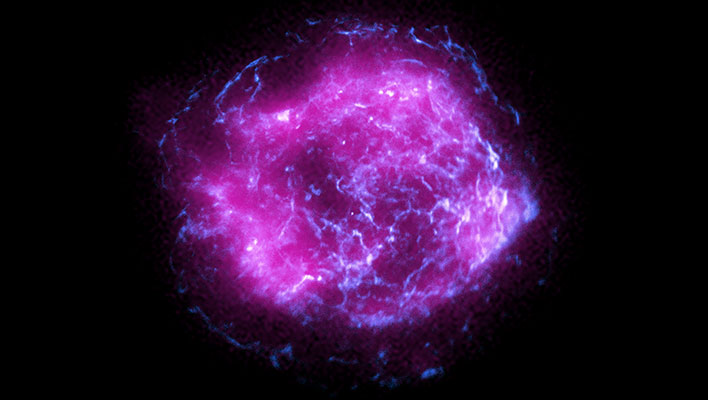 "The IXPE image of Cassiopeia A is as historic as the Chandra image of the same supernova remnant," said Martin C. Weisskopf, the IXPE Principal Investigator based at NASA's Marshall Space Flight Center in Huntsville, Alabama. "It demonstrates IXPE's potential to gain new, never-before-seen information about Cassiopeia A, which is under analysis right now."

One of the essential measurements that IXPE is capable of making is called polarization. Polarization allows researchers to determine how X-ray light is oriented as it travels through space, and gives them clues to the environment where the light began. The instruments aboard IXPE also allow for the measure of energy, time of arrival, and the position in the sky of the X-rays from cosmic sources.

Scientists are hopeful that the polarization data from Cassiopeia A will allow them to see, for the first time, how the amount of polarization varies across the supernova remnant.

"IXPE's future polarization images should unveil the mechanisms at the heart of this famous cosmic accelerator," stated Roger Romani, an IXPE Co-Investigator at Stanford University. "To fill in some of those details, we've developed a way to make IXPE's measurements even more precise using machine learning techniques. We're looking forward to what we'll find as we analyze all the data."