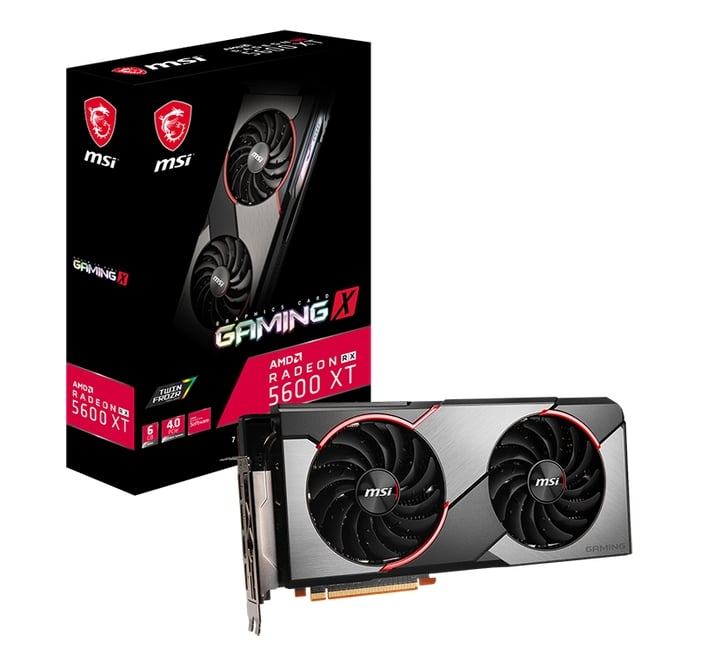 AMD's Radeon RX 5600 XT announcement/launch hasn't exactly been the smoothest for the company. Things started off well enough with the announcement at CES 2020, where AMD showed off a graphics card that offered better performance than the GeForce GTX 1660 Ti/1660 Super priced at $279. However, NVIDIA quickly countered by lowering the price of the ray-tracing capable GeForce RTX 2060 to $299, or $279 in the case of EVGA.

AMD's response was to issue a new vBIOS to its OEM board partners to further boost game and boost clocks, while pushing GDDR6 speeds from 12Gbps to 14Gbps. It's that latter spec change that is causing some grief for AMD's partners. In an episode of the MSI Insider podcast this week, MSI marketing director Eric Van Beurden and product marketing manager Pieter Arts explained the dilemma that faces OEMs producing the Radeon RX 5600 XT.

As Beurden explained, the new vBIOS ups TDP from 150 watts to 160 watts, which allows for some more overhead with respect to clock speeds. For example, Sapphire increased the game and boost clocks of its Radeon RX 5600 XT Pulse from 1560MHz and 1620MHz to 1615MHz and 1750MHz respectively. Those higher clocks are easily obtained given sufficient cooling.

Where the problem comes in is with the GDDR6 memory. According to Arts, AMD supplies the memory chips to board partners, and those chips were only validated to operate at 12Gbps. So, hitting the higher 14Gbps speeds can be hit or miss, as there is no guarantee that the chips would be able to overclock to those speeds reliably. And the last thing that manufacturers want is to receive a flood of returns from customers complaining about defective cards. So while the MSI Radeon RX 5600 XT Gaming X boasts the higher 1615MHz/1750MHz speeds, its GDDR6 is still rated for 12Gbps.

For Radeon RX 5600 XT boards that are already in transit, customers will need to update their vBIOS on their own (if an updated vBIOS is provided at all). However, in due time, the cards will ship from the factory with the performance-enhancing vBIOS already installed – and hopefully GDDR6 that has been reliably rated to run at 14Gbps. MSI's first card that supports not only the higher game/boost clocks, but also the higher 14Gbps GDDR6 speeds will be the Radeon RX 5600 XT Gaming Z, which will launch next month.