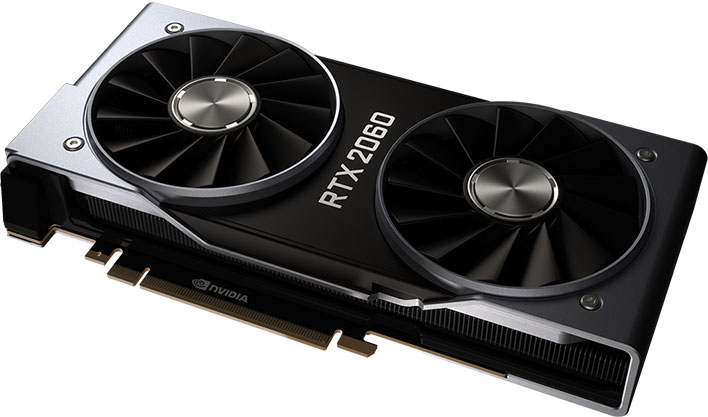 Say it with us folks, 'Hooray for competition!', and then navigate to NVIDIA's product page for the original (read: non-Super model) GeForce RTX 2060 Founders Edition graphics card. It is now listed on NVIDIA's website at $299, representing a timely price drop ahead of AMD's Radeon RX 5600 XT launching to retail next week.
Right around a year ago, the GeForce RTX 2060 launched at $349, and it stayed at that price point even after the GeForce RTX 2060 Super made a debut at $399. More recently, NVIDIA's add-in board (AIB) partners have offered custom models for less than the official price, though for the most part, pricing still hovered above $299.
That's true even at the time of this writing—a quick check on Newegg shows only EVGA's recently announced GeForce RTX 2060 KO edition card selling for $299, while the majority of cards are priced at $329 and up (before factoring in mail-in-rebates on a small number of cards). That will likely change now that NVIDIA has officially slashed the price.
Official price drops from NVIDIA are fairly rare. The timing of this one is undoubtedly a strategic reaction to AMD's Radeon RX 5600 XT. AMD claims its newest Navi card is faster than NVIDIA's GeForce GTX 1660 Ti, and that may very well be the case (we'll know for sure when benchmark and review the Radeon RX 5600 XT).
Barring a last minute change of pricing on AMD's part, the Radeon RX 5600 XT is a $279 card. So technically, it's not in direct competition with the GeForce RTX 2060. However, a $20 difference makes things more interesting, given that the GeForce RTX 2060 is likely faster with the benefit of dedicated hardware for ray tracing to boot.
There could be yet another wrinkle to this story. I wouldn't bank on this happening, but AMD could make things even more interesting by dropping the price of the Radeon RX 5600 XT on launch day. It would not be an unprecedented move. When we spoke to AMD's Scott Herkelman last July, he claimed AMD had "jebaited" NVIDIA into tipping its hand with its GeForce RTX Super refresh when the AMD was getting ready to launch its Radeon RX 5700 series.
The short version is, the Radeon RX 5700 XT and Radeon RX 5700 were announced at $499 and $379, respectively. But when NVIDIA responded by launching a GeForce RTX 2070 Super for $499 and GeForce RTX 2060 Super for $399, AMD dropped the price of its Radeon RX 5700 XT to $399 and the Radeon RX 5700 to $349 at launch. The claim is that those were the price points AMD had intended all along.
I would caution against getting your hopes up of something similar playing out with the Radeon RX 5600 XT, but hey, anything is possible. Even without a price drop, however, things just got a little more intriguing in the mid-range graphics card sector.