Keeping a secret about Battlefield 2042 is like sailing in a boat with a screen-door bottom: it is not super effective, but it is most certainly exciting. However, we are only two days from EA Play Live, where we should find out more about the upcoming Battlefield title, and there is a lot to look forward to... 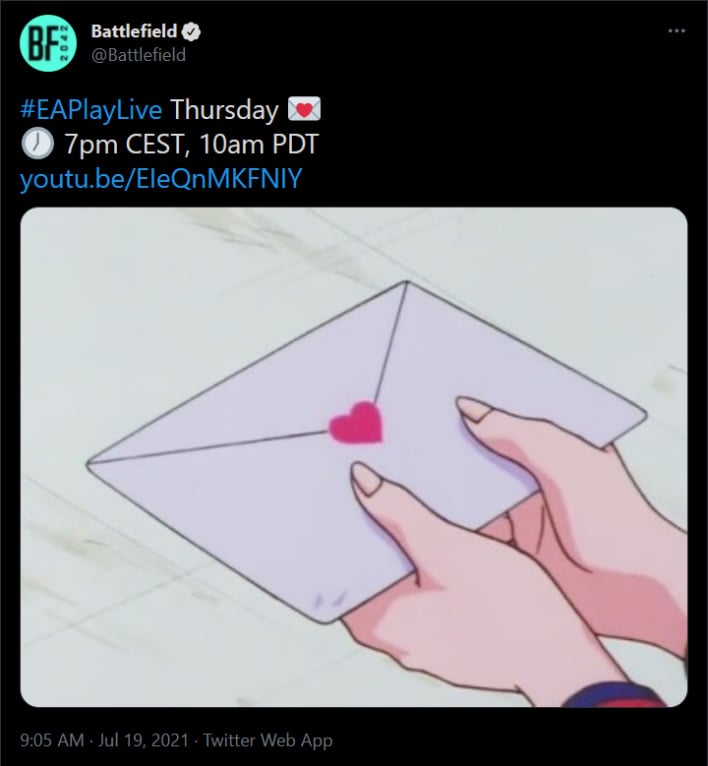 What has been dubbed the “love letter” to core Battlefield fans, the rumored “BATTLEHUB” is quite interesting, from what we have heard. According to past rumors, the “BATTLEHUB” will reportedly bring multiple generations of Battlefields into one epic sandbox experience. With this, maps, weapons, vehicles, and more are being ported to the Battlefield 2042 engine so players can duke it out with various gear, which should lead to some interesting battles. If you want to find out more, you can read up on the “BATTLEHUB” here.

One of the new features coming to Battlefield are specialists, who come with special gear and abilities. These characters are somewhat like the class system that prior Battlefield titles had, where an effective squad has a balance of characters. At present, we only know about four different specialists, leaving six ones secret for a future reveal. Could we see some new operators uncovered at EA Play Live?

Today, the Battlefield Twitter account sent out a “glitchy” video with some mysterious sounds in the background. While this could be a red herring, it could also be a new Battlefield 2042 feature or perhaps just a hint about the “BATTLEHUB.” If you have any ideas of what this could be, let us know in the comments below.

How To Watch EA Play Live

If you want to catch all the new Battlefield 2042 information, you can watch the EA Play Live stream on YouTube below. The event kicks off at 1:00 PM EST or 7:00 PM CEST and is expected to run for a couple of hours.

We will also get to hear about Apex Legends, Lost in Random and other games, so stay tuned to HotHardware for coverage on those.