A few weeks back, we heard about the potential for some old Battlefield maps making their way to Battlefield 2042 through a rumored “Battlehub” game mode. It appears that some developers are rather excited about this reported “love letter to fans,” as a new mention about the “REDACTED” game mode has slipped out.


During EA Play’s Live Spotlight Series today, GM of Ripple Effect Studios (formerly DICE LA) Christian Grass confirmed that fan-favorite Battlefield maps would be coming to Battlefield 2042. While he explained that it would be a while before we hear about the whole thing, this confirmation solidifies previous leaks.

I can't say that much about it. What I can say is that one of the components in this experience that we're creating is that we're adding some of the fan-favorite maps back into Battlefield 2042. But the entire experience you have to wait a bit longer, before we reveal what that is.

Those initial leaks were brought up by Battlefield and Call of Duty leaker Tom Henderson who is not one to miss out on posting new information. Following Grass’ confirmation, Henderson tweeted some of the maps coming to the rumored “BATTLEHUB,” which may not actually be called “BATTLEHUB.” These maps include Metro, Locker, Siege of Shanghai, and Caspian Border among others which are all rather exciting. 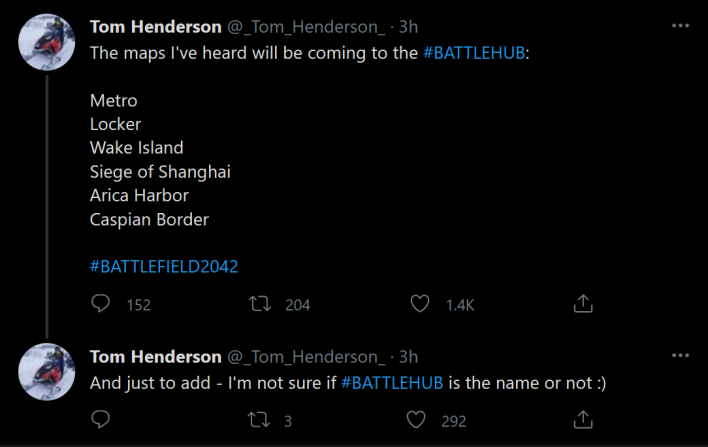 Interestingly, many of these already have levolution or a major event that changes the map, so we are curious how this could adapt with Battlefield 2042. Either way, we are extremely excited for this Battlefield throwback mode, and hopefully it will not be too long before we hear more about it.  In any event, let us know what you think about the 'BATTLEHUB' as its called in the comments below.