Minecraft RTX Exits Beta With DLSS Boost, Plus How To Win A GeForce RTX 3080 From NVIDIA

NVIDIA and Microsoft first launched the Minecraft with RTX beta back in mid-April, and it made the typically rudimentary-looking game look absolutely amazing with ray traced water, lighting, and shadow effects. Well, NVIDIA has spent the past eight months optimizing its RTX makeover of Minecraft and is now ready for the full-scale, public release.

Rather than being a standalone client as it was when the beta initially launched, RTX functionality is now fully backed into the mainline Minecraft client for Windows 10. In addition, there are two new worlds that NVIDIA will introduce (Colosseum RTX and Dungeon Dash RTX), which means that there are now 15 free “RTX” worlds available in Minecraft.

"Minecraft with RTX players will by default see everything enhanced with a special Physically Based Rendering texture pack, which interplays with the ray-traced effects to further enhance your experience," writes NVIDIA. Even though you may have these fancy new ray-traced effects in-game with your supported graphics cards, you can still game alongside other Minecraft players on competing platforms; they "will [just] see Minecraft’s standard visuals."

We have to mention, however, that since Minecraft is fully path traced, it can bring modern graphics cards down to their knees. In our testing with a GeForce RTX 2080 Super, the initial beta recorded 22.3 FPS at 4K resolution. However, when we turned on NVIDIA DLSS 2.0, we saw those frame rates more than double to 64.1 FPS. Dropping down to 1080p with DLSS 2.0, frame rates soared to 82.4 FPS with the GeForce RTX 2080 Super. 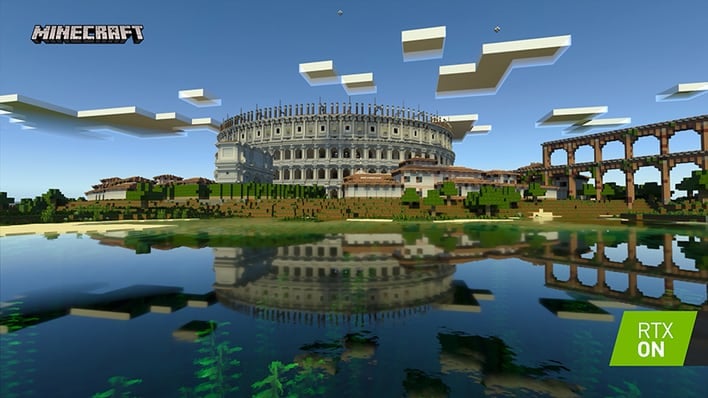 The second factor working against AMD is that it doesn't currently offer an equivalent to NVIDIA's DLSS 2.0 upscaling. As a result, Radeon RX 6000 graphics cards will be struggling even more than GeForce RTX cards without DLSS 2.0 enabled.

If you are currently on the Minecraft with RTX for Windows 10 Beta, NVIDIA provides the following steps to get back to the mainline branch:

And in related news, NVIDIA is giving gamers a chance to win a GeForce RTX 3070 to GeForce RTX 3080. The company asks that you grab a screenshot or video of your RTX-enabled Minecraft creations and plaster them all over social media with #Minecraft and #RTXON tags. You can view full details on the contest here.