Here's Why Microsoft Is Shutting Down Minecraft Earth On June 30

Minecraft could very well be one of the biggest and longest-running games of the 2000s and beyond. The creators at Mojang and now Microsoft tried to use the massive momentum behind the game to spin-off an AR variant of Minecraft, which had people explore the world akin to the popular Pokemon Go. The game, aptly named Minecraft Earth, is now sadly coming to an end to allocate development resources elsewhere as going out and about has become more challenging than ever.

According to the staff at Minecraft.net, “Minecraft Earth was designed around free movement and collaborative play – two things that have become near impossible in the current global situation.” Due to this, active players have likely decreased immensely. It seems that the game also never took off like the developers had wanted, as the Google Play store only reports around five million downloads, and it is likely that the Apple App Store has similar numbers. Thus, there is no need to keep pouring resources in when tens of millions of players still play the other versions of Minecraft. 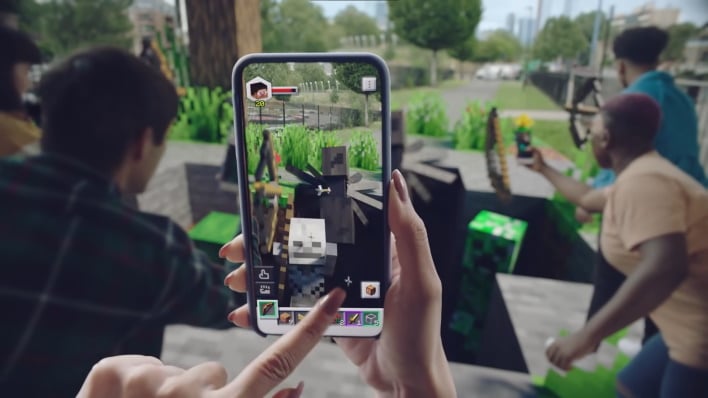 Though Minecraft Earth is coming to an end, the developers do want to take the game out with a bit of a bang so the dedicated players can have some fun. As such, there is one last final build of the game which has been released today which does the following:
Players will have until June 30th of this year to enjoy Minecraft Earth before it is deactivated entirely. On July 1st, the Minecraft team will delete all Minecraft Earth player data if it is not related to the Character Creator or Minecoin entitlements. As for purchases made in the game, all players with paid ruby balances will be granted Minecoins to be used in the Minecraft Marketplace. Moreover, if you ever made a purchase in Minecraft Earth, you will get a free copy of Minecraft Bedrock Edition to use those Minecoins and enjoy Minecraft on another platform.

Overall, though it is always sad to see a game be sunset, this is incredible customer service from Mojang and Minecraft Earth's creators. It also seems that shutting down this project was not an easy decision, so you can show your love to the developers by playing in this new free to play sunset mode starting today.