How To Migrate Your PC Games From Bethesda Launcher To Steam

It's the end of an era, though not very long one. The Bethesda Launcher is shutting down. But what about all of those games you purchased exclusively through the Bethesda launcher? Worry not, because you can transfer them to Steam through a relatively straightforward proess.

In February Bethesda announced the sunset of the launcher that featured many of its popular titles, like DOOM, Quake, Fallout, and Wolfenstein. Much like many other games developers, Bethesda's decision to release its own launcher likely stemmed from the revenue share requirements of other storefronts. However, now that the purchase of parent company, ZeniMax Media, by Microsoft is complete, the continued support for yet multiple launcher has become redundant, especially considering Microsoft has the Xbox launcher for Windows and also distributes many of its titles on Steam.

Thankfully, it is possible to transfer your Bethesda launcher library just straight to Steam, and the steps, outlined on Bethesda's website could not be simpler. 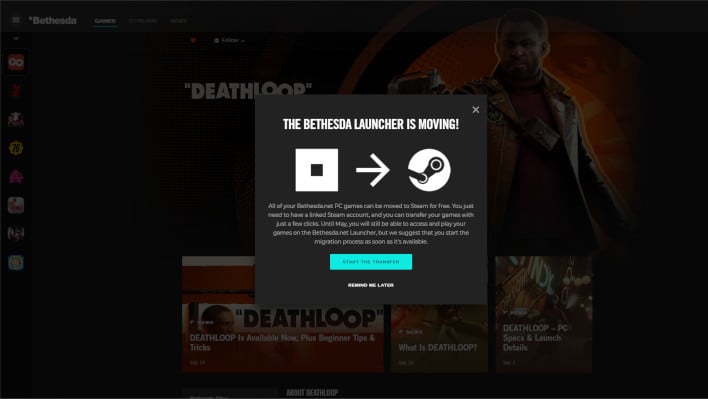 Once you're back at the Bethesda Transfer page, you will see a button that says "Begin transfer," click that button and confirm. And that is it; those are all of the steps necessary to transfer your Bethesda launcher games to Steam. We told you it was easy.

When the transfer is complete, a notification will come through via email, and Steam should also notify you that you've got unlocked games in your library. 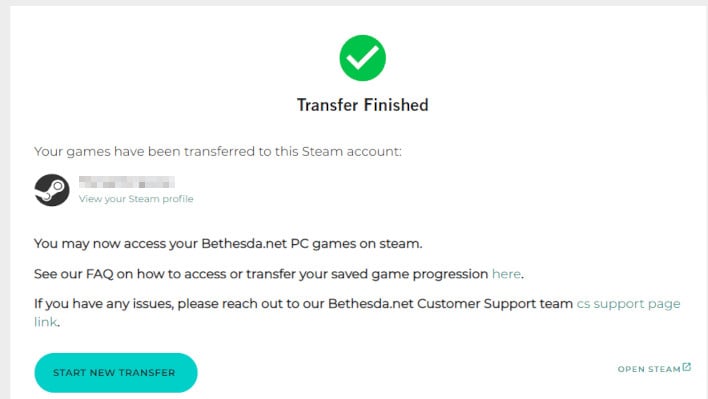 
With the process complete, the transfer page should look like the screenshot above. Additionally if you decide to grab more games from the launcher before it's shutdown on May 11, you can trigger yet another transfer at that time. Bethesda, however, has not stated how long the transfer tool will stay up, but it seems likely it will remain available even after the shutdown of the launcher so as not to upset customers. Bethesda has also published information outlining local save game transfers that may need to be done for certain games. For those wondering if it's possible to transfer your items to Xbox accounts, so far that answer is no.