Bethesda Launcher Is Shutting Down, Here's What Will Happen To Your Games

Bethesda on Tuesday announced it is sunsetting its own launcher and, starting in early April, you'll be able to migrate your games and Wallet to your Steam account. This should be a mostly seamless process, though Bethesda wanted to give gamers an advanced heads up to prepare for the migration, game saves and all.
This means you'll have one less launcher to juggle in a couple of months, if you were using the Bethesda.net Launcher in the first place. For those of you who are, Bethesda promises "you will not lose anything" during the migration, though there are some caveats. For example, there are a few games that will require manual transfers of saved games.
"Should you choose to transfer your Bethesda.net library to your Steam account, we will provide instructions on how to migrate your game progression and saves over to your Steam account where possible, so you may continue playing where you left off. Some saves will automatically transfer, however some will require you to manually copy them to your Steam folder," Bethesda explains in an FAQ. 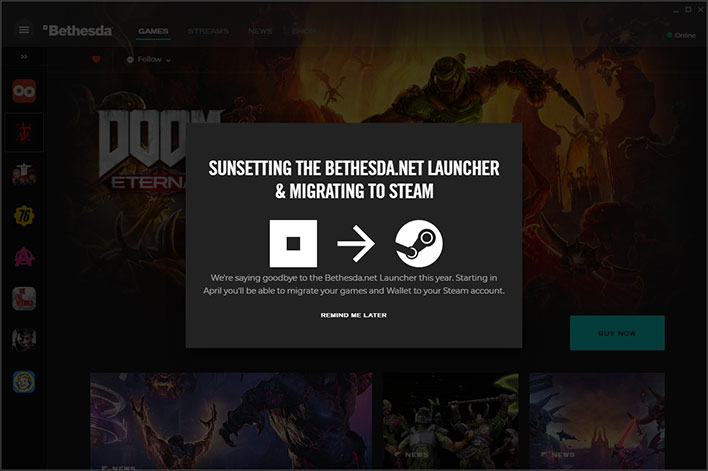 Instructions on how to do this will be provided at a later date. Additionally, Bethesda says it expects "almost all" of your saved games will be transferable, except for Wolfenstein: Youngblood. It's not stated why saved progress for that game won't transfer over, only that it is currently the one exception. So if you're pretty far along, you may want to fast track finishing the game, or else have to start over.
Any in-game virtual currency you own (such as Atoms or Crowns) will be moved over to Steam as well. Same for friends lists in applicable games (including Wolfenstein: Youngblood, oddly enough). That said, Steam is the only destination available—Bethesda will not support migrating to Xbox or PlayStation, or to another PC service outside of Steam.
The Bethesda.net Launcher will shutter completely in May of this year, after which it's Steam or bust for your Bethesda games. However, your Bethesda.net account will remain intact to access other services, including modes and in-game items like skins.

There are a few other topics covered in the Bethesda launcher FAQ, as well as a separate Fallout 76 FAQ. In it, Bethesda ensures that your character and progress in Fallout 76 will survive the migration, and that your C.A.M.P. and Shelter builds will remain, too.
We suspect most people will embrace the migration, given the popularity of Steam. And kudos to Microsoft, which owns Bethesda (by way of its ZeniMax acquisition) for not forcing a migration to the Microsoft Store instead.