We are all cautiously optimistic (or at least hopeful) that Windows 11 will arrive to PCs without a hitch. That is never a given when a new operating system comes out, and even though Windows 11 is more akin to a major Windows 10 update, it would not be surprising if some bugs came along for the ride. That is where you come in—Microsoft is dangling a carrot in front of Windows Insiders to help catch bugs before Windows 11 releases, as part of its first Windows 11 Bug Bash event.
What exactly is that? It is a series of "Quests," as Microsoft calls them, found within the Feedback Hub. They are essentially various tasks to help Microsoft root out issues and quirks. Some of the tasks are fairly common, while others are a bit more niche where bugs are more likely to slip through the cracks without an incentive program. 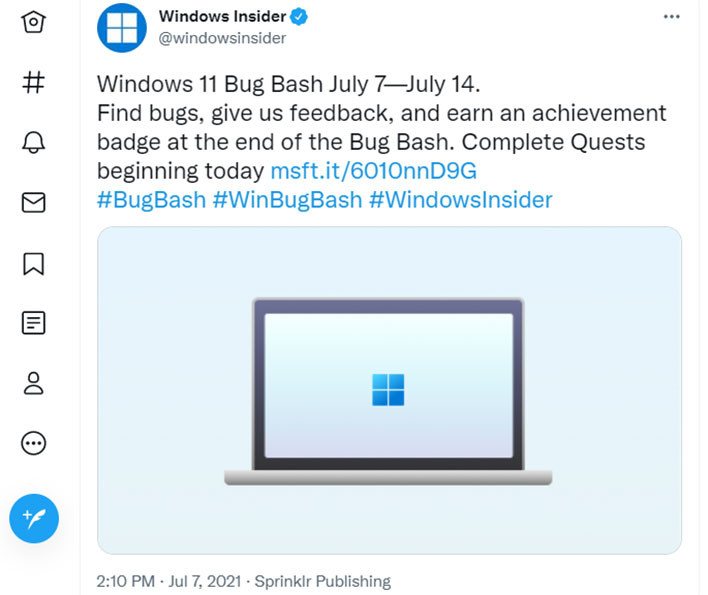 Here are a few of the Quests available to Windows Insiders...
These and other Quests hone in on specific areas that Microsoft wants to focus on, to ensure a smooth roll out when Windows 11 arrives. The idea is to go through them one-by-one and offer feedback to Microsoft, whether you encounter an actual bug or just want to offer up input on the experience as currently constructed.
The event runs from today until July 14. To participate, you have to be running a Preview build of Windows 11, which also means joining the Windows Insider program (it's free). There was a leaked build of Windows 11 going around prior to Microsoft's formal introduction, but there is now an official Preview build you can install on your PC.
Just bear in mind that Preview builds are unfinished and could come with problems and quirks that will be ironed out when the final release arrives. That is something to consider before you install a Preview build on your main PC, if that is something you are thinking about. At the very least, it is a good idea to back up any important files first.
Windows 11 is due to arrive by the end of the year. Rumor has it we could be looking at a launch around Halloween, or not long after. As things currently stand, you will need to enable a security feature called Trusted Platform Module (2.0) in your BIOS, which on most systems either appears as fTPM or PTT.
If you plan to perform an in-place upgrade from Windows 10 to Windows 11 (rather than a new or clean install), you will have to wait a little bit longer—Microsoft said it will begin dishing up the upgrade in the first half of next year.