If you have any last words for the Adobe Flash Player that is embedded in Windows 10, you better speak up now, because Microsoft has begun throwing dirt on its grave. Or more precisely, multiple users have reported a new Windows patch being pushed out that wipes out the last remaining remnant of the defunct tool.
This comes a month and a half after Adobe officially ended support for Flash, having issued its final update last December (for all regions outside of Mainland China). 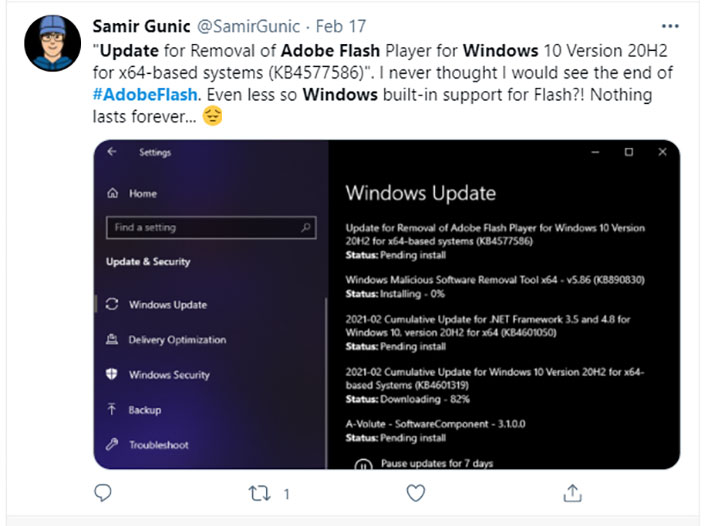 "We want to take a moment to thank all of our customers and developers who have used and created amazing Flash Player content over the last two decades. We are proud that Flash had a crucial role in evolving web content across animation, interactivity, audio, and video. We are excited to help lead the next era of digital experiences," Adobe said at Flash's funeral.
The last day of support was December 31, 2020, then on January 12, 2021, all Flash content began to be blocked from running in the Flash Player. However, you may have noticed that there is still a Flash Player icon in your Windows 10 PC's Control Panel (open the Control Panel, then click on the pull-down menu in the upper-right and select Large or Small icons).
It won't be there for long. Last October, Microsoft released an optional tool (via KB4577586) to completely remove Flash Player from PCs. Now it appears to making its way to Windows 10 PCs through Windows Update, as an automatic patch.

For the most part, this is a good thing, though in some cases it might cause a temporary hiccup, as seen in the tweet above. More interesting is that, according to Microsoft's support article on KB4577586, this is an optional update, though users are reporting it is being applied automatically.
It's not a huge deal (except in China, where a railroad came to a grinding halt after Flash was disabled), because the Flash Player no longer works anyway. Think of this as bit of early spring cleaning. And for what it's worth, after applying the update, there is no going back—Microsoft says in no uncertain terms that KB4577486 "cannot be uninstalled."
If you are antsy to get rid of the Flash Player icon from the Control Panel and have not yet received the patch through Windows Update, you can grab and install it manually from Microsoft's Update Catalog.