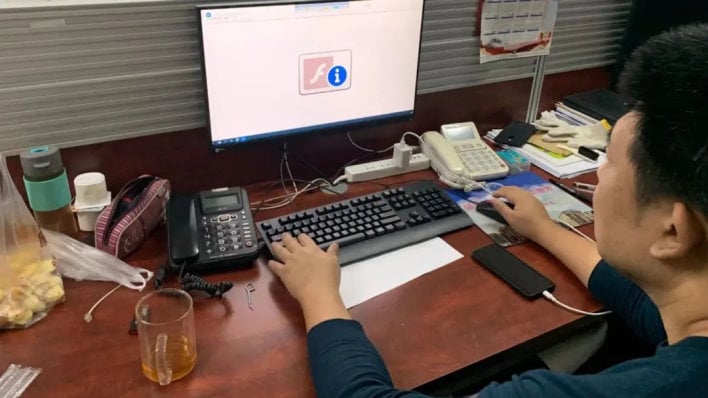 Everyone was afraid of the "Y2K bug" that would leave un-patched systems in a quandary, but January 1, 2000 came and went with hardly a whimper. Instead, it's January 12, 2021 that will live in infamy, perhaps. Adobe announced the coming end of Flash, its long-lived and much maligned multimedia plugin, way back in 2017, but that wasn't enough motivation to some developers apparently. The bad news is that it's end users that suffer, as some mission-critical apps stopped working on January 12, after the final Flash plugin update came with a timed lifespan. In one painful example, that meant that a local railroad system in Dalian, China went offline for about 20 hours, stranding passengers in the process.

The original story on Chinese media has been pulled, but thanks to the intrepid Duty-Machine bot on GitHub, the story as it unfolded has been preserved for all to see. At 8:15 AM local time on January 12, the computer room at a Dalian railway station received a support call reporting that the internal website that showed things like the train schedule and the current ordering of train cars had gone offline. Within 30 minutes, every PC on the rail operator's network was experiencing the same issue. At midnight GMT on January 12, the Flash plugin triggered its built-in kill switch, rendering the plugin totally useless, and now these PCs were starting to feel the effects.


According to Google's translation of the Duty-Machine mirror of the original story (which has since gone offline), local IT had to search the internet to discover that the Flash plugin had, in fact, been forcefully stopped by Adobe. Railway IT members remotely connected to affected PCs and performed "temporary product replacement", which we think means downgrading the Flash plugin. An hour later, PCs were still struggling to keep the maps and schedule functional. Every couple hours, local IT would have to remotely connect to a PC to temporarily fix it.

This went on for about 20 hours as machines would struggle to load the web pages correctly, and the mirrored story reports that the train system was not running as it was not possible to keep trains moving safely. The Dalian train system's IT staff split up into hardware and software teams, and the software team would restore an older version of the Adobe Flash plugin from a backup PC that had been kept offline and still had a version that wouldn't stop functioning after the drop-dead date of the latest version.


At 1:10 AM on January 13, the Flash-based representation of the train cars were moving again. An hour later, IT staff went to the Dalian West Power Plant station and replaced the hardware entirely to get Flash working again at that site. Finally at around 4:30 local time, IT reported that all stations were operating normally again. Needless to say, everyone involved was exhausted due to the long work day, and the story reflects a happy IT team.

During more than 20 hours of fighting, no one complained and no one gave up. The slim hope motivated each and every one and turned into the fuel to push forward. In the solving of the Flash malfunction, the depot displayed true initiative, innovation, and brilliance.

According to an official statement from the Dalian Depot's administration which said the "complete paralysis" of the Dalian train system was not true. The mirrored story which seems to say otherwise. Officially, the issue was limited to newer computers that were having problems. "According to the statistics of this section, the current train system has always been operating normally, the railway train dispatching system has been operating normally, and the railway transportation production has not been affected in any way."

We have to wonder why it took a catastrophic failure to get the railway's attention, since Adobe has been trumpeting about this change and the final demise of Flash for over three years now. This should be a warning to all those who cling to ancient systems based on outdated tech. Hopefully history won't repeat itself the next time a vendor chooses to retire a technology that causes more problems and headaches than it solves.