The Steam Deck has not even released yet, but it is already proving to be a highly popular console—it did not take long to fill up reservations for the first batch of shipments that will go out in December, and any new reservations ($5 down) are now quoted as arriving sometime after the second quarter of next year. Adding to the hype, a tweet by Microsoft's Phil Spencer suggests that XCloud support is headed to the handheld PC.
Spencer is the head of Microsoft's Xbox division, so the tweet holds significant weight. While nothing has been officially announced as it applies to XCloud support on the Steam Deck, Spencer did say that it "works well" on the handheld, noting that he recently visited Valve and spoke with a few bigwigs, including Gabe Newell, Erik Johnson, and Scott Lynch. 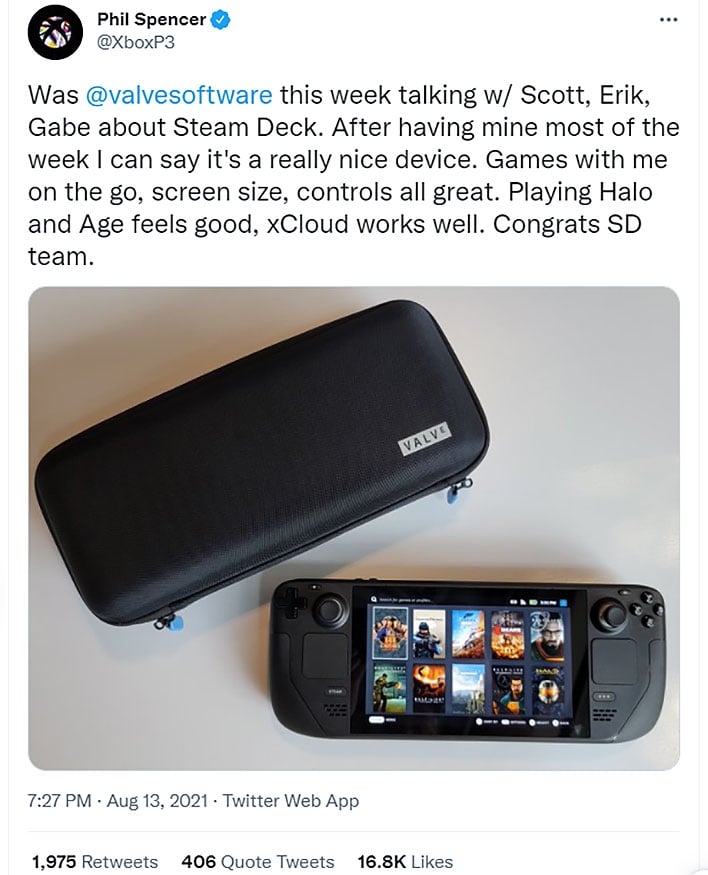 "Was @valvesoftware this week talking w/ Scott, Erik, Gabe about Steam Deck. After having mine most of the week I can say it's a really nice device. Games with me on the go, screen size, controls all great. Playing Halo and Age feels good, xCloud works well. Congrats SD team," Spencer wrote.
At the time of this writing, the Twitter post has racked up nearly 17,000 'Likes' and has been retweeted around a couple thousand times. The prospect of running Microsoft's XCloud game streaming service on the Steam Deck has obviously struck a positive chord with gamers.
Even without it, the Steam Deck is an interesting kit. It is essentially a handheld PC built powered by a custom 4-core/8-thread AMD Zen 2 processor and RDNA 2 graphics, alongside 16GB of RAM and up to 512GB of storage. It also features a 7-inch display with a 1280x800 resolution and 60Hz refresh rate.
On the software side, it runs SteamOS 3.0, which is based on Arch Linux. Newell has championed the open nature of the Steam Deck, as a user could install a different OS like Windows 11, if they wanted to. It's also been said that the Steam Deck can run the entire library of Steam games, which is obviously a huge selling point.
What about XCloud? Spencer's tweet does not make it clear if Halo and Age of Empires were run on the Steam Deck through the cloud gaming service or if he played those titles on Steam. Regardless, he is very clear that XCloud does actually work on the Steam Deck ,and "works well" with the handheld.
That is an interesting proposition. XCloud taps into Xbox Series X server blades in the cloud, to offload game processing chores away from local hardware. Microsoft could build an app specifically for the Steam Deck, though in this case, Spencer probably tooled around with the service in a browser.
It's also worth noting that XCloud recently arrived in polished form to the Xbox app in Windows 10. Like the previous beta, users need a compatible controller that connects to their PC via USB or Bluetooth. Then it's just a matter of opening the Xbox app and clicking on the Cloud Games button.
Here's hoping Microsoft is able to roll out official XCloud support for the Steam Deck when it arrives later this year.