Microsoft has announced Games for Work. This is a new app for its Teams workplace collaboration app, to facilitate playing games with co-workers. Gaming with co-workers might be considered an unwelcome distraction by some employers, but Microsoft asserts that some co-worker gaming fun can "build trust, create connections, and improve team morale." It adds that, with the growth of hybrid and remote work, gaming is a great way to reinforce the sense of community in a team. Letting your employees have some fun in computer games isn't just 'being nice', Microsoft cites a study by Brigham Young University suggesting that teams who played short video games together were "20 percent more productive" than other groups.
Though Games for Work is new, Windows users both old and new will probably be quite familiar with a lot of the casual multiplayer titles that are available via this app. Some of the games you will be able to indulge in with your work colleagues include; Microsoft Solitaire, Microsoft IceBreakers, Microsoft Minesweeper, Microsoft Wordament and more. Microsoft notes that these games are all safe for work ('E' rated) and ad-free. Apparently, throwing a bone to domineering bosses, each of the games Microsoft provides emphasizes a different element of team building. The games can accommodate between 2 and 250 players. 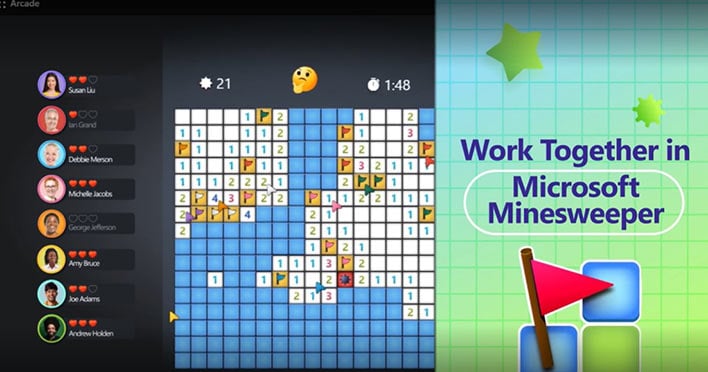 Microsoft's Team developers worked closely with Microsoft Casual Games, one of the divisions within Xbox Game Studios, on Games for Work. The brief given to the studio was to formulate fun games which would allow co-workers to "pause and re-energize" within the virtual office that is represented by Teams.
In addition to the above selection of classic games, Microsoft reminds Teams users that they already have access to fun and useful social apps in teams such as: 'Polly in Teams' for live polls, surveys, quizzes, trivia, and Q&A; plus 'Kahoot! in Teams' for team learning games.
At the time of writing, Microsoft says that Games for Work in Teams is a 'Pilot App'. Thus, it is possible it will be changed based on user and employer feedback.