Microsoft Flight Simulator is celebrating a monumental milestone, as Microsoft releases its 40th Anniversary Edition. The new version is touted as being the most advanced in the highly-popular franchise to date.

Bruce Artwick first began development on Flight Simulator way back in 1977. Artwick was approached by Alan M. Boyd of Microsoft in 1981, and a year later Artwick's company released the first licensed version of Flight Simulator for the IBM PC to Microsoft. The iconic aviation game has managed to survive all these years, and now Microsoft is celebrating the 40-year anniversary of the beloved game.

The 40th Anniversary Edition gives gamers a huge upgrade in not only content, but a list of fixes as well. With new planes to fly and new missions to carry out, there should be plenty to experience for both novice and expert flyers alike.

For the first time since the 2006 release, helicopters and gliders are available, which are said to "perform with amazing life-like realism." There are also seven renowned historical aircraft making the cut: the 1903 Wright Flyer, the 1915 Curtiss JN-4 Jenny, the 1927 Ryan NYP Spirit of St. Louis, the 1935 Douglas DC-3, the 1937 Grumman G-21 Goose, the 1947 Havilland DHC-2 Beaver, and finally the 1947 Hughes H-4 Hercules "Spruce Goose." Along with new aircraft, there are also four new classic airports, including the Meigs Field in Chicago, as well as 15 glider airports.

In terms of controls, Microsoft says you can expect "significant technical advancements in flight dynamics and simulation." Pilots will be able to test their skill against the challenges of riding thermals in an unpowered glider, controlling rotor-wing aircraft over urban cities, improved real-time atmospheric simulation, as well as live weather in a "dynamic and vibrant world." 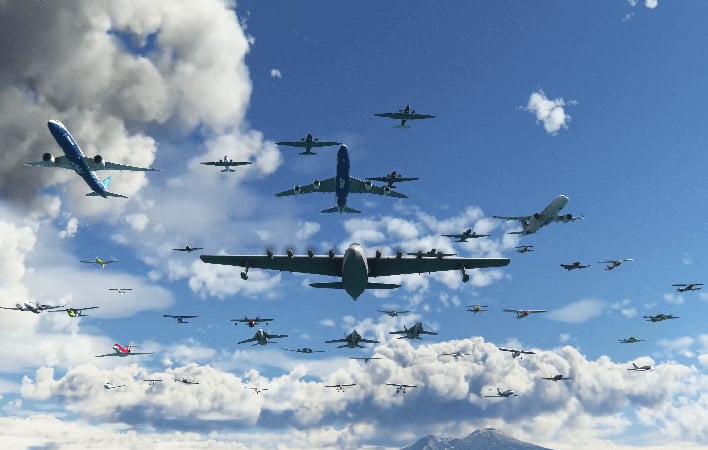 If you are a current player, you can download the new content for free. Microsoft does warn that if you play on PC, outdated packages in your community folder may have an unexpected impact on the game's performance and behavior.

Microsoft Flight Simulator 40th Anniversary Edition is available now for download on the Xbox Series X/S and PC with Xbox Game Pass, PC Game Pass, Windows, and Steam, and on Xbox One and supported mobile phones, tablets, and lower-spec PCs via Xbox Cloud Gaming. So, no matter what you may have available to game on, you should have the ability to fly the friendly skies.