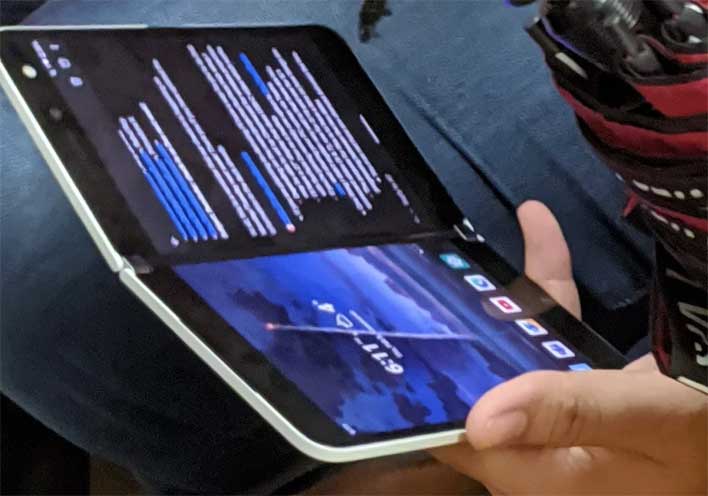 For many people, the folding smartphones that are out there with seamless screens -- like the Samsung Galaxy Fold and Huawei Mate X -- aren't super appealing. They cost a lot of money and have questionable durability. For those who want more screen real estate in a smaller package, something like the Surface Duo and other devices out there with two separate screens in one device might be the ticket. Recently a photo of what appears to be a Surface Duo was snapped in the wild.

The device is presumably being used by a Microsoft worker who is testing the device ahead of launch. It shows the two separate screens that fold out into a decently sized tablet when needed. One thing of note in the image, which was snapped by Israel Rodriguez, is that we can see the front camera and what appears to be an LED flash.

The front flash wasn't on the prototype device that was seen back in October when Microsoft first teased it. We have to wonder if perhaps the design has been changed. If the screen section with that camera and flash on it can fold forward and backward, perhaps the device will give up a rear camera sensor in favor of a single sensor that can be used for selfies and rear photos. That could make the device more affordable. Sadly, we can't see the back of the device snapped in this image to see if that may be the case.

One camera might be a concern for some people as photography is one of the big differentiators for many smartphones. A single sensor that is subpar compared to other devices could be a deal-breaker for some. At the same time, users who rarely take pictures may not mind a single camera. The fact that the device is being tested in the wild suggests that the Surface Duo may be launching sooner than expected, and Microsoft did show off the preview SDK for the Surface Duo late last month.