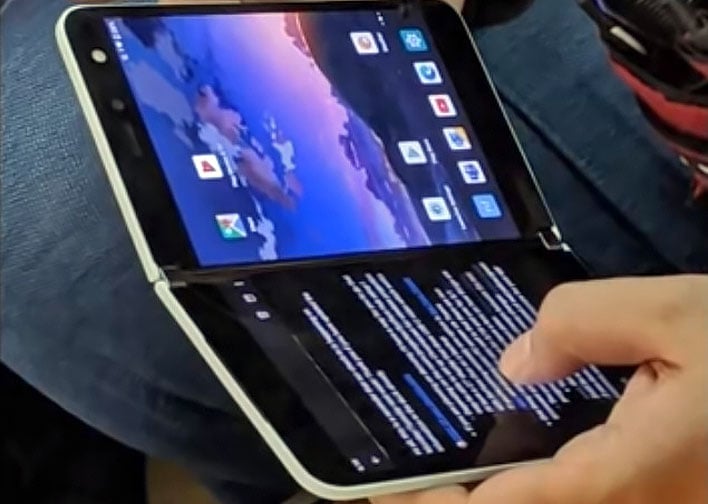 Microsoft doesn't have a good track record in the smartphone realm, with its failed Windows Phone platform and hardware that didn't get people excited as an alternative to Android and iOS. Microsoft eventually threw in the towel and ended development of its Windows Phone OS, but it's certainly not done in the pocketable mobile device market yet. The company is at work on a new Android tablet-smartphone hybrid of sorts called the Surface Duo, and a lot of people are excited about the device. It has now turned up on video out in the wild, and the forthcoming foldable looks very compelling.

The video shows the smartphone in use by a man who appears to be sitting on public transit. The actual video of the device in action starts at about 26 seconds in on the video embedded below. Before that video starts, some still images are embedded that show the user working with the device. We can see in those images a clear line between the screens, though the bezels between screens are very thin.

Those who saw the story we ran on Friday with a single still image of the Surface Duo will recognize the device and setting in the video. That still image from Friday was taken from this video. The video opens with the Surface Duo folded back so that one screen is used to play a video game. We do notice thick bezels at the top and bottom of the screen with what appears to be the camera sitting beneath the user's thumb.

At about 1 minute and 10 seconds in the video, it appears that the user is trying to activate the pull-down menus Android is known for and is unable to do so in landscape mode. He eventually turns the device to portrait mode to get the menus to work. One would hope that Microsoft fixes that issue before the Surface Duo launches.

The user then launches what appears to be an email application. It appears to have a list of messages on one screen and the content of the chosen message on the other. It's also noticeable during the video that the two halves of the screen fit tightly together when closed, but the device is thicker than a standard smartphone or tablet, looking roughly twice as thick when closed, obviously.

We are looking forward to seeing more about this device. One critical detail will be price. Surface devices generally demand a premium, but we're hopeful Microsoft's foldable will be cheaper and a bit more robust than the Galaxy Fold or Motorola Razr.