Microsoft's Surface Duo 'Peeks' For The Camera In A Leaked Video

It will still be several more months before Microsoft launches its Surface Duo, a new dual-screen device that you can slip in your pocket. The Surface Duo is essentially an Android phone developed with the cooperation of Google on the software side. We don't have a ton of details yet, though a leaked video points to an interesting "Peek" feature.
Twitter user WalkingCat posted the video, which shows the Surface Duo partially unfolding to give users a peek at any Android notifications that might exist. The notifications appear on the right-side of the Surface Duo, and users can swipe to interact with them. It looks as though they can be deleted as well, without opening the Surface Duo completely. 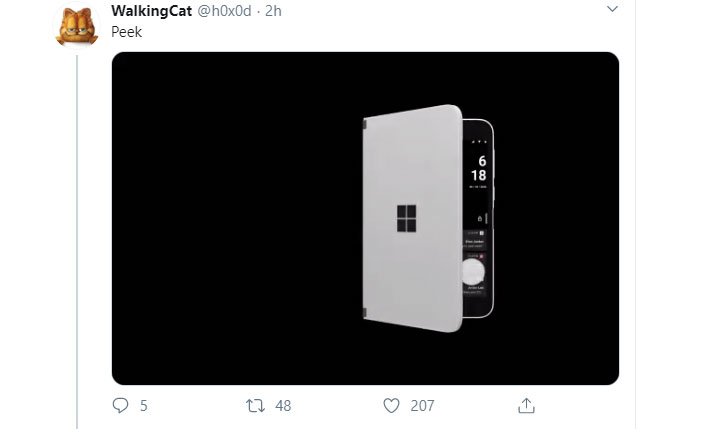 There's also a second video that shows the same feature with regards to incoming phone calls. As shown, a user would be able to crack open the Surface Duo to see who is ringing in, without committing to answering the call. Shutting the Surface Duo would presumably reject the call, and opening it allows the user to accept the call.
It's not clear how useful this Peek feature will be in practice. In theory, it looks interesting, and it's a way of bypassing having a third screen on the outside of the Surface Neo to display notifications and incoming calls like Samsung's Galaxy Z Flip. But is partially opening the dual-screen device really something that users will embrace? Time will tell.
The Surface Duo is slated to arrive in holiday 2020, which means November or December. It's expected Microsoft will reveal more details before then, and hopefully shed some light on the leaked Peak feature demonstrated in the videos.