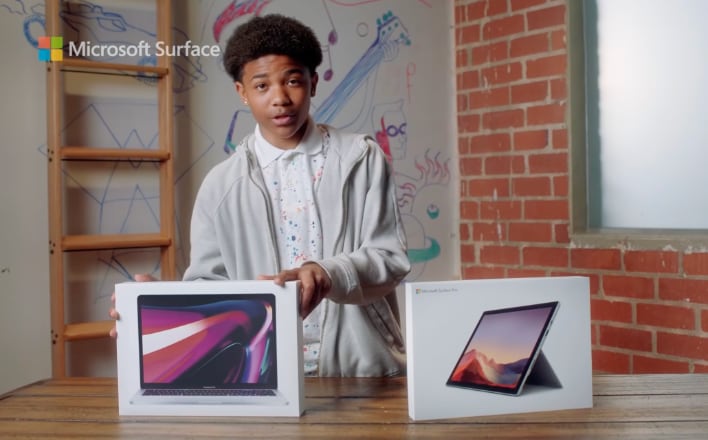 Is Microsoft tired of hearing about the Apple's MacBook Pro and its performant M1 SoC? That could perhaps be the case with Microsoft's latest Surface Pro 7 ad which is a succinct 30-second attempted takedown of the MacBook Pro. Whether the commercial is successful is up to the view to decide, however.

The commercial starts off with a kid talking about the Surface Pro 7's impressive 12.3-inch touch screen, which supports an optional Surface Pen for writing and drawing on the display. He then turns his attention to the MacBook Pro, which of course doesn't include a touch screen. Apple has long shunned including a touch screen on its laptops, as it feels that the ergonomics don't support adding the feature in a laptop form-factor (among other reasons).

Apple does, however, include a Touch Bar on MacBook Pro, which is mocked in the commercial. “Mac gave me this little bar, but why can’t they just give me a whole touchscreen," says the boy. Interestingly enough, if recent reports are accurate, Apple has also soured on the idea of the Touch Bar. It's reported that the all-new 14- and 16-inch MacBook Pro laptops that will be introduced later this year will ditch the controversial feature.

The ad goes on to tout how the Surface Pro 7 is a "much better gaming device", which is a rather curious claim given its available 10th generation Core processors with integrated graphics (not even Intel's newest 12th generation Iris Xe graphics). No one would claim that the MacBook Pro -- especially in entry-level form – is a monster gaming machine, but the Apple M1 processor offers better overall performance (gaming or otherwise) than what you'd find in a Surface Pro 7.

It's a rather odd commercial in general, as most would probably seemingly compare the MacBook Pro with the Surface Book family, while the Surface Pro 7 would be compared to the iPad Pro. The iPad Pro supports touch input, the detachable keyboard, and optional stylus (Apple Pencil) that Microsoft calls out in the ad.

What do you think of Microsoft's latest commercial? Does it hit the bullseye, or does Microsoft miss the mark with its MacBook Pro takedown?