Here's A Glimpse Of Microsoft's Metaverse And It Starts With Teams

Remember when having an online presence meant coming up with a clever nickname? It's been that way since the AOL days (these days it's better known as a 'gamertag', depending on the platform), but as companies push the idea of a so-called metaverse, you better think about what kind of avatar you want to represent you. And it's not just Facebook pushing the concept—Microsoft is moving towards a metaverse of its own, spearheaded by its Teams software.
Microsoft isn't going so far as to rebrand itself like Facebook, which is now an entity around a parent Meta company (sort of like Google sits under Alphabet). But it is embracing the metaverse. What exactly that does that mean? It's a fancy-sounding buzzword without a single, definitive definition, but it's essentially a network of virtual 3D worlds, products, and services. The term actually dates back to Neal Stephenson's Snow Crash novel from 1992, which hopefully is not an actual roadmap for where all this is headed.
As it applies to Microsoft's efforts in the space, it is building upon its Mesh software technology that was announced several months ago, which is a mixed reality platform powered by Azure. Microsoft Mesh uses 3D capture technology to beam of images of people—holograms—into a virtual scene.
Following up on that, Microsoft announced today at its Ignite conference that Mesh for Teams will be available to preview in 2022. It will have some immersive spaces where Teams users can connect and interact with one another, through avatar representations.
"In a sense, the metaverse enables us to embed computing into the real world, and to embed the real world into computing, bringing real presence to any digital space," Microsoft CEO Satya Nadella explains. "For years we talked about creating this digital representation of the world, but now we actually have the opportunity to go into that world and participate in it.
"I can't overstate how much of a breakthrough this is. It is no longer just looking at a camera view of a factory floor, you can be ON the floor. It's no longer just videoconferencing with colleagues, you can be with them in the same room. It's no longer just playing a game with friends, you can be IN the game with them," Nadella added. 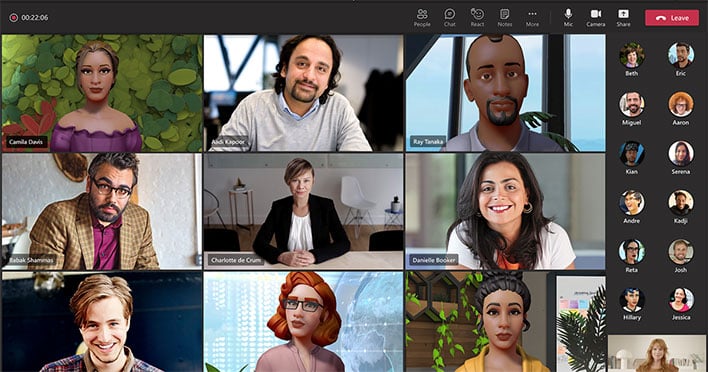 Microsoft says it is turning away from a focus on spaces and places, and onto omni-connected experiences. Maybe you're not in the mood to put on a smile or look at little ragged from a late night, or simply have webcam fatigute. Whatever the case might be, avatars in Teams offer another way to be present, that some may find more comfortable.
Whether playing games or collaborating on projects, Microsoft sees this expansion of Teams into the metaverse as an important step forward. It will be interesting to see how it all evolves over time, as well as the concept of a metaverse as a whole. We'll get a glimpse soon.