Facebook's Meta Rebrand Is About Its Play to Dominate The Metaverse

Facebook recently said it was looking to do a rebrand amidst the scandal that was caused from release of internal company documents. Today, Mark Zuckerberg announced that rebrand and it is simply Meta.

Zuckerberg has been talking about moving Facebook as a company into what he calls the "metaverse," So, it is no surprise that he chose Meta as the new brand name. In his most recent Founder's Letter, he says that his love for the word "meta," taken from the Greek word meaning "beyond," stems from his love of the classics. In the letter he says, "For me, it symbolizes that there is always more to build, and there is always more to the story."

Meta is being billed as a social technology company. It will include all of what people currently think of when referring to Facebook, such as Instagram, WhatsApp, Oculus and Facebook itself. Moving forward, however, all of the companies will be housed under the Meta brand. This also positions the company squarely in the forefront of the metaverse it hopes to dominate.

What Zuckerberg hopes to do is have people think of Meta and not Facebook as being the "company." Zuckerberg said in his Founder's Letter, "Right now our brand is so tightly linked to one product that it can't possibly represent everything we're doing today, let alone in the future." One cannot help but think it also has much to do with changing the conversation of recent transgressions by the company and taking people's focus off the current torrent of bad publicity Facebook is currently enduring.

On the company website's new listing for Meta, it list its principles (as seen in the picture below). The two principles that have been at odds are "Give People a Voice" and "Keep People Safe and Protect Privacy". Facebook's current situation revolves mainly around how it handled the attack on the Capitol Building at the beginning of the year. While its seems it wanted to allow for a broad range of freedom of speech, many questioned how far that range should extend. Some argued that allowing that broad of a range was dangerous and brought about more violence. 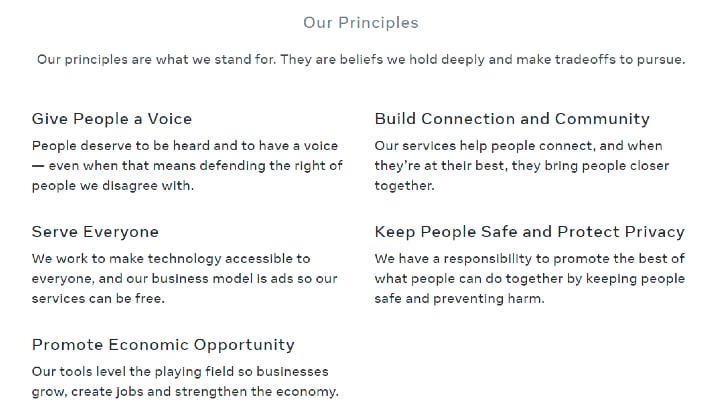 On Meta's webpage for Promoting Safety and Expression, the headline reads, "When we're open to hearing each other with tolerance and respect, we all benefit." This would lead one to think that many of the past policies will remain in place in regard to how it deals with what it allows on its site. A little further down the page it says, "For content that doesn't violate our rules but has been rated false by independent fact-checkers, we reduce its distribution to help prevent it from going viral." It remains to be seen if simply reducing the distribution of posts containing false narratives will appease those that would much prefer to see it gone altogether.

Facebook and Zuckerberg have been under an enormous amount of scrutiny stemming from all that was revealed when internal documents were handed over to the SEC and most currently a select group of media outlets. While Facebook is no stranger to controversy surrounding how it conducts business, this time it seemed to cut a bit deeper.

On a side note, it seems this new rebrand has users wondering if Facebook will remain free as there has been a huge spike in people searching, "Is Facebook Free?" While the rebrand might cause some to think the company is moving toward a paid service type site, the ad revenue the company brings in should be more than enough to keep it free for users (for now).

Time will tell if this Meta rebrand helps Facebook moving forward. In reality, however, it would more than likely take a mass exodus of its users and a large loss of ad revenue for the social media giant to change many of its ways. In any event, you can check out Facebook's keynote at Connect 2021 for more of Zuckerberg's vision (it's about and hour and 20 minutes long).

*Update* It seems there will be further name changes coming to three Facebook, oops Meta, owned companies according to a Facebook post from CTO Andrew Bosworth. First, the Oculus Quest will become Meta Quest and the Oculus App will be Meta Quest App. The second will be a change in name for the smart display Facebook Portal. It will become known as Meta Portal instead. It is clear that Meta will be engrained into the company moving forward. Perhaps there will be a InstaPortal and WhatsPortalApp coming soon as well. The final change will be in the AR/VR Facebook Reality Labs. It will drop Facebook and simply be known as Reality Labs.