At this year's Ignite conference, Microsoft unveiled a new mixed reality platform powered by Azure that brings holographic teleportation (or "holoportation") into the forefront of today's digital landscape. It is called Microsoft Mesh, and it uses 3D capture technology to beam images of people into a virtual scene, like when R2-D2 delivered a message from Obi-Wan Kenobi to Luke Skywalker (yes, we're nerds).
"This has been the dream for mixed reality, the idea from the very beginning," said Microsoft Technical Fellow Alex Kipman. "You can actually feel like you’re in the same place with someone sharing content or you can teleport from different mixed reality devices and be present with people even when you’re not physically together."

For all the pain and suffering and devastation wrought by the pandemic, it may have also accelerated future-thinking concepts into the forefront, as we collectively cope with how to work and educate in a landscape where social distancing is still the smart play. Technologies like Microsoft Mesh suddenly seem less fringe.
There are several different ways Microsoft Mesh can be deployed. One of them is through collaborative meetings, like a supercharged Zoom or Teams session. This does not have to entail holograms, either—people can choose to project themselves as avatars if they prefer. 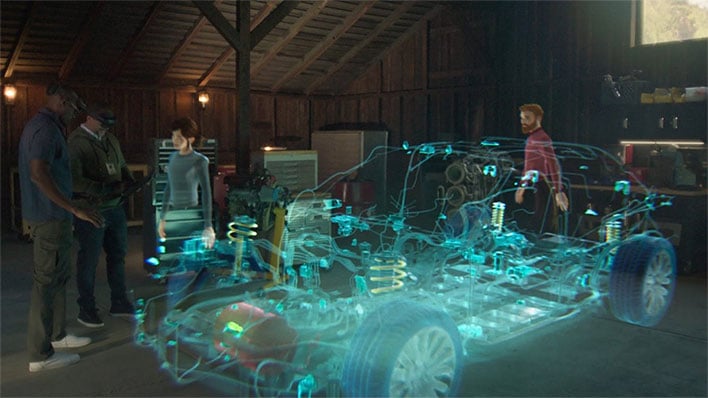 Beyond that, Microsoft is also pushing this as a way for people in different parts of the world to get together virtually, through holograms or avatars, to work with virtual 3D models.
"Architects and engineers could physically walk through a holographic model of a factory floor under construction, seeing how all the pieces of equipment fit together in three dimensions, potentially avoiding costly mistakes. Engineering or medical students learning about electric car engines or human anatomy could gather as avatars around a holographic model and remove parts of the engine or peel back muscles to see what’s underneath," Microsoft says.
There are lots of ways something like this could be put to good use. Short of actually being somewhere, next to real objects and real people, this could be the next best thing, in some situations. That is the idea, anyway.
Not the least bit surprising, one of the two apps built on the Microsoft Mesh platform announced at Ignite is for HoloLens 2, a natural fit for something like this. The other is AltspaceVR, described as " the premier place to attend live shows, meetups, cool classes, and more with friendly people from around the world."
That is just where it all begins, though—Microsoft is planning to integrate Mesh into Teams and Dynamics 365, as well as open it up to other devices, including VR headsets, PCs, smartphones, and more.