We've all become jaded with spam and unwanted marketing emails, and so it's become instinctive to just delete anything that even remotely appears to fall into either category. You might want to check your spam and deleted emails folders, though. Microsoft is randomly sending out gift cards to users, and yes, they're real (read: not a scam).
The biggest rewards at the moment appear to be $100 gift cards. If you've been chosen, the email's subject line will read, "Here's $100 to start your holiday shopping." Then when you open an email, there's a large gift card graphic (as partially shown above) with a link to redeem your free reward at the Microsoft Store. How's that for some holiday cheer? 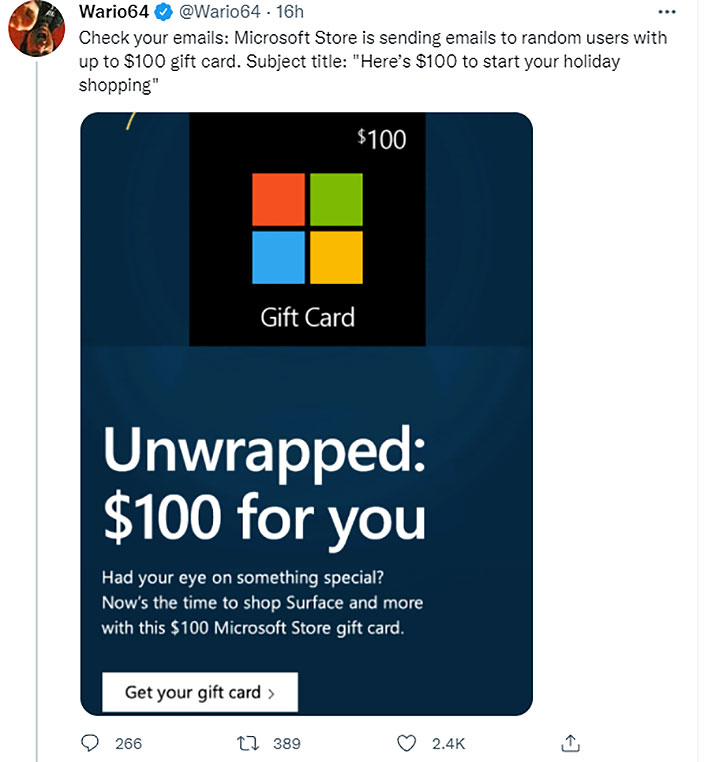 Deal tracker @Wario64 called attention to the promotion on Twitter, and Microsoft confirmed it as actually doing this. If we can put on our Debbie Downer derby for a moment, this also opens the door for phishing scams, so if you have one of these emails, double-check that it did actually come from Microsoft and that the redemption link is legitimate.
According to the responses in the Twitter thread, some rewards are $10, while others (myself included) are just receiving promotional emails with no gift card amount at all (bummer!). But definitely check your folders—multiple users report they would have otherwise missed out on their $100 reward, if not for the heads up in the tweet.
"Had to dig it out of my archives. Would have never been the wiser," one user wrote. "Thanks for the heads up! Found it in my deleted folder, you the GOAT," another user wrote.
Yet another user said they found the email in their Xbox Live account, which they otherwise never bother to check. So keep that in mind as well, and fingers crossed you're a lucky recipient!