Microsoft will be retiring Internet Explorer once and for all on June 15. However, Microsoft won’t be out of the web browser game with this retirement. The company has shifted its focus to maintaining and developing the Chromium-based Edge browser. Microsoft rolls out new Edge features fairly often, though some of them may be of somewhat questionable value.

The latest feature coming to Windows’ default browser is what seems to be a Virtual Private Network (VPN) contained within the browser. The official documentation never uses the term VPN and instead refers to the feature as the Microsoft Edge Secure Network. Even so, the descriptions of the feature matche those of a VPN. The documentation even states that users will be able to browse the web with a “virtual IP address.”

A possible downside of the Microsoft Edge Secure Network compared to a traditional VPN is that it is restricted to activity within Microsoft Edge. None of the benefits listed above will extend to connections made outside Microsoft Edge, whereas a traditional VPN offers those same benefits system or even network-wide. Most VPNs also allow users to select their preferred country, region, or specific server, but it seems that Edge Secure Network users won’t have this same choice. 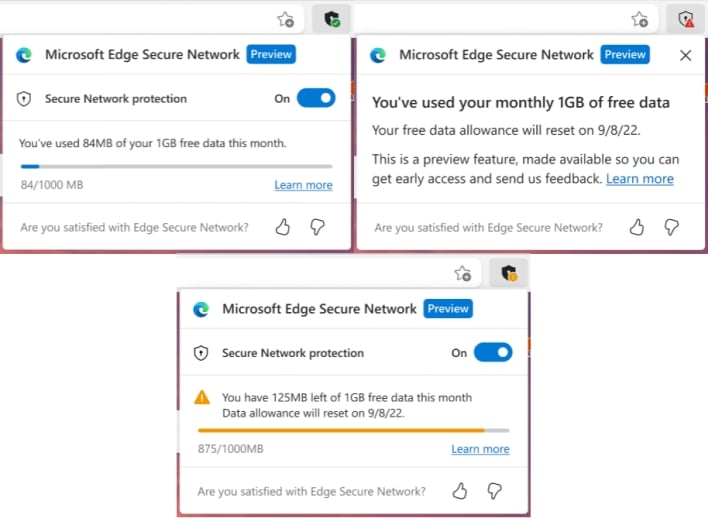 Microsoft Edge Secure Network will be available for now as a preview feature with limited bandwidth. In order to enable the feature, users will have to sign into their Microsoft Accounts. Once enabled, users will be limited to just 1GB of data per month, which is quite limiting. Users streaming or downloading video in Edge might hit that cap in less than a day. Fortunately, it appears that this limitation is only temporary as Microsoft tests out the feature. We will have to see whether Microsoft eventually opens up the feature for free unlimited usage or introduces a payment plan for users to go beyond 1GB per month.

Microsoft is offering this new feature in collaboration with Cloudflare, which is providing the secure remote proxy. The documentation offers the following privacy notice for Cloudflare: “When requests are sent to the Cloudflare proxy, Cloudflare will observe your source IP, the destination IP address (website) you are accessing, source port, destination port, timestamp, and access token provided by Edge. This data will be stored briefly as part of Cloudflare’s temporary logs, and then permanently deleted within 25 hours of Cloudflare’s receipt of such information. Cloudflare will not log your request data and will not use it for any purpose other than to provide the Proxy service.”