As we slowly say goodbye (and good riddance) to Internet Explorer, the millions of users still using it will need a replacement. Microsoft is trying to make sure that the replacement is its own Microsoft Edge browser based on Chromium. The company is now claiming that Edge will be the best-performing browser on Windows 10, but is it just marketing, or is the browser up to snuff?

Today, Microsoft’s Build developer conference kicked off, and with it comes a slew of announcements concerning developers, businesses, and consumers alike. One of the bigger announcements was about the upcoming Edge version 91, bringing some new features to the platform. The first feature is called “startup boost,” which should make the browser launch quicker than before. Microsoft explained that startup boost does this by putting some core Edge processes in the background. 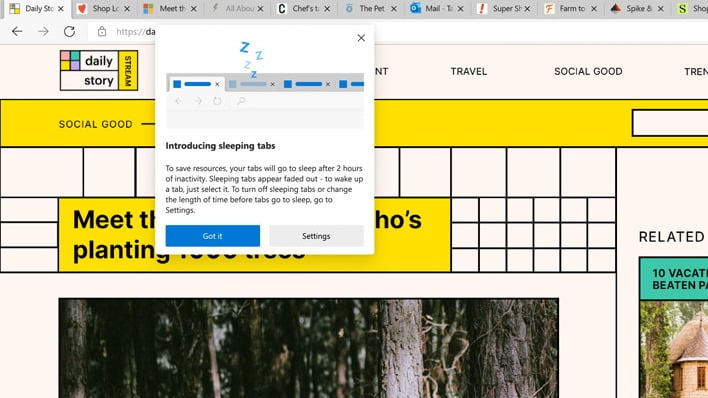 The second, and perhaps bigger, feature is called “sleeping tabs,” which Microsoft claims can help save up to 82% in memory usage. This works by putting tabs into a sleep mode where ads are paused, and Windows-specific improvements to save system resources are enabled. Users can then customize when sleeping tabs are put to sleep so crucial information or data is not lost if a tab is idle for a certain timeframe.

With the retirement of Internet Explorer just around the corner, Microsoft stepping things up with Microsoft Edge is a good sign. Moreover, the browser is quite impressive compared to the competition, so making the switch has never been easier. Hopefully, Microsoft has more announcements for Edge and other products in the pipeline at its Build event, so stay tuned to HotHardware for updates.