Microsoft Confirms Android APKs Can Be Sideloaded In Windows 11

At the Windows 11 reveal event, we got to see several new features, which are quite exciting. One of these new features is the ability to install and run Android apps on Windows 11, as if they were regular programs, via the Amazon Appstore. But what about cases where an app you need is not available for the Appstore?

The Android apps feature coming to the Windows 11 is happening is thanks to a partnership between Amazon and Intel with its Intel Bridge Technology. This technology is the important part of the equation here, as it is a “runtime post-compiler that enables applications to run natively on x86-based devices, including running those applications on Windows.” In short, this means apps compiled for mobile devices are tweaked so they can run without issue on desktop processors. Sadly, Microsoft only mentioned that apps were to be acquired through the Amazon Appstore, which is, by some accounts, not the best. 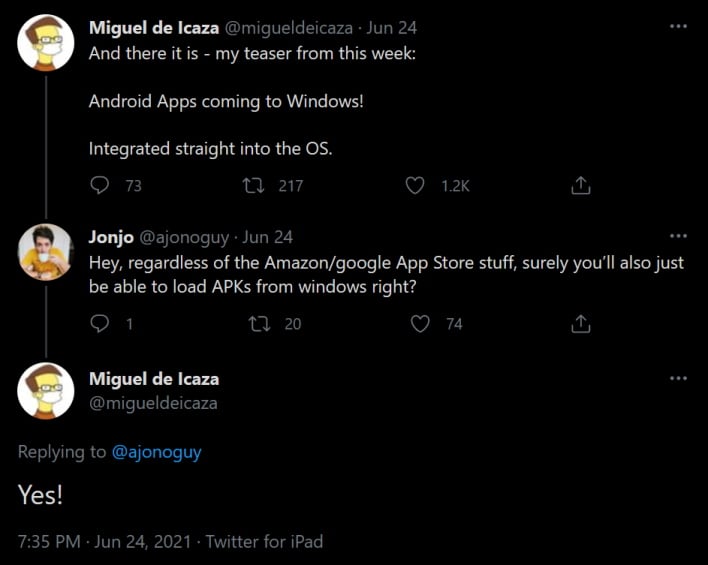 However, Intel Bridge Technology should allow for any app to run, not just ones from Amazon. After Microsoft employee Miguel de Icaza tweeted about Android apps coming to Windows 11, @ajonoguy asked if APKs, or Android Application Packages, could be sideloaded onto a computer without using any app store. Icaza then replied that this would be possible, which is great for people who are wanting to avoid Amazon as a middleman. With this, people would be able to go out and download APKs from wherever they wish, making life a lot easier.

There definitely could be security risks in letting people sideload APKs onto their PCs, but so long as Microsoft has built everything out safely, it should be less of a problem. In any case, it is nice to see Microsoft allowing for this non-standard usage, but let us know what you think of APKs on Windows in the comments below.