Halo Infinite is the first brand new Halo installation since 2015, when Halo 5: Guardians came to the Xbox One. To say there's a lot of hype around the much-delayed return of Master Chief after apparently going rogue in the previous installment, ultimately being recovered by Spartan Locke. Apologies for the spoilers on a six-year-old game, but the Halo Infinite reveal announced that information itself. Besides, we're sure that Microsoft has bigger things on its mind, like the fact that the company leaked information about the sixth mainline Halo game's plot.

According to Halo writer and cinematic director Joseph Staten, Microsoft inadvertently included some files that contain information about the game's campaign in its tech preview build, a multi-player beta for which just kicked off on Thursday. Any developer knows that sinking feeling when their own actions cause big problems. Spoilers will just ruin a single-player game, and we're sure that the development team is just beside itself that they're responsible for campaign details making their way online. 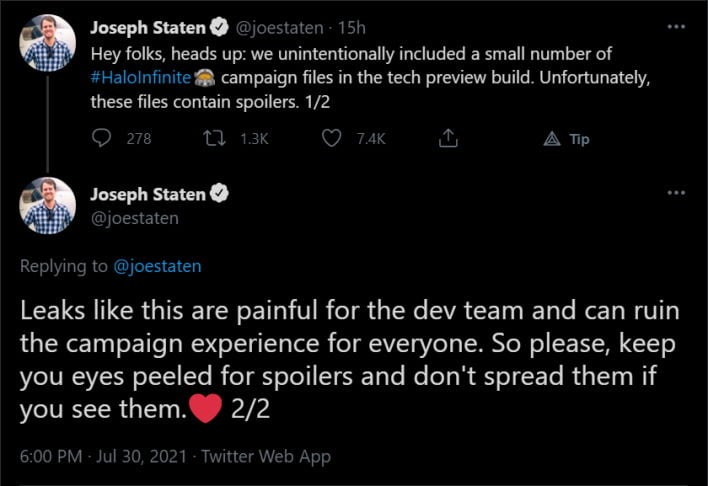 Staten said on Twitter that the details included in the beta can ruin the campaign for everyone, and players should "keep you[r] eyes peeled" for spoilers. We'd recommend players who are interested in the campaign, rather than the free-to-play multi-player component, avert their eyes should they stumble upon them online.

And for everyone's sake, please avoid posting spoilers yourself, unless you want to incur Microsoft's wrath, because the company is taking its gaffe very seriously. Halo community manager Brian Jarrard tweeted that players not post data-mined campaign details to their various social channels. Jarrard says that leakers face a threat of a takedown notice, which will result in strikes on some platforms, including YouTube. Developer 343 Industries is asking those who have already posted data to their channels take it down themselves, before it's too late.

While Microsoft hasn't confirmed it just yet, it seems likely that a corrected build that removes these files has already been posted. It should be relatively safe for gamers who are interested in the multi-player beta to register and join in. Microsoft has shown off footage of the F2P portion of the game, and it looks exquisite.