The PC is a natural fit for Microsoft's Xbox Cloud Gaming service, otherwise known as xCloud, and it is headed to that platform later this year. That is, after some additional testing. Rest assured, Microsoft is currently testing xCloud on iOS and PC internally, both of which are played through a browser, and some screenshots have leaked out showing what it might look like when it launches to the public.
A pending launch on iOS and PC is something Microsoft announced back in December, saying it is "embracing multiple devices" the Xbox ecosystem.

"In Spring 2021, we will take the next step in our journey to reach more players around the world by making cloud gaming as part of Xbox Game Pass Ultimate available on Windows PCs through the Xbox app and browser, and iOS devices through mobile web browser. By adding over a billion devices as a path to playing in the Xbox ecosystem, we envision a seamless experience for all types of players," Microsoft said. 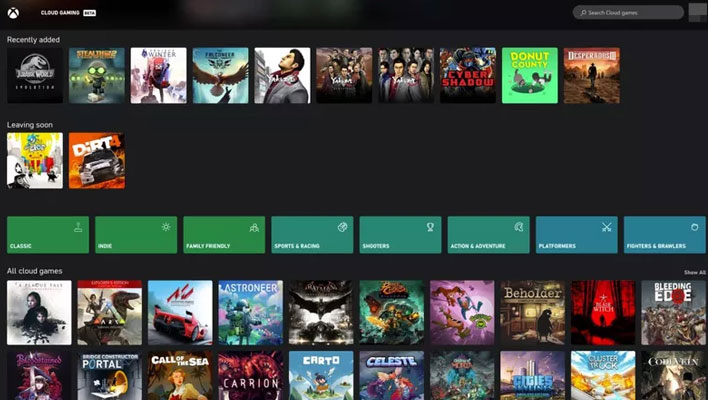 Source: Microsoft via The Verge

As we get closer to a public launch, sources familiar with Microsoft's plans relayed to The Verge that Microsoft is testing a web version of xCloud internally as it gets ready to introduce a public preview. Those sources also apparently shared a couple of screenshots with the site, including the one you see above.
The service appears to be running within Microsoft's Edge browser, as it will feature support for Chromium-based browsers, and Safari. The main screen shows a list of supported games, as well as recently added ones, and titles that are coming soon.
Similar to how it works on Android, users can launch a game within the browser, which then runs in fullscreen mode. It will recognize a game controller as well. As for the hardware running the show, in its current form, xCloud taps into Xbox One S server blades. It will take an upgrade to Xbox Series X hardware to push 4K resolution gaming, assuming that is in the cards.
Leveraging the browser allows Microsoft to offer a service like this on iOS devices. It's still a kludgy workaround, though, as Apple requires that each game on the service have its own accompanying app.

Back in September, Microsoft told CNET Apple's rules make for a "bad experience for customers," noting that gamers would prefer to host a single app like they can do for movies and songs (via apps like Spotify, for example). Maybe things will change by the time xCloud launches to iOS—we'll find out in several months.