Micron is developing 232-layer NAND flash memory and expects to ramp up production by the end of the calendar year. Announced this week at its Micron Investor Day 2022 event, Micron is pitching its 232-layer technology as the "world's most advanced" NAND flash memory solution to power what it says will be industry leading products.
The additional layers effectively means Micron can cram more storage on its chips, which in turn could lead to more capacious solid state drives (SSDs). Micron is double stacking its 3D memory cells, as is the case with its existing 176-layer solutions (two 88-layer stacks). This has the benefit of lowering production costs, savings that are in part passed on to consumers. 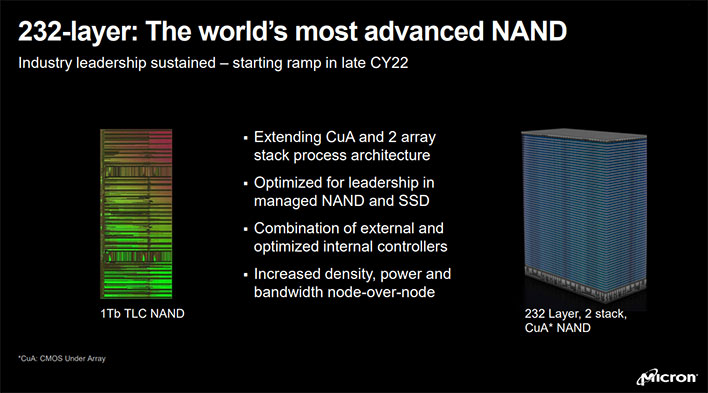 Micron's 232-layer solution is based on the company's CMOS under array (CuA) technology. There's no mention of speeds or performance numbers, though the timing and market focus suggests this will underpin next-generation SSDs (both client and datacenter products) that leverage the PCI Express 5.0 bus. The PCIe 5 bus doubles the available bandwidth compared to PCIe 4, and will see much faster drives on the horizon.
We also know that Micron's introductory 3D NAND memory device built on 232 layers uses a triple-level cell (TLC) memory die with 1-terabyte (around 128GB) of capacity. Overall, Micron is promising better density, power, and bandwidth versus its 176-layer tech, with optimized controllers to boot (both internal and external). 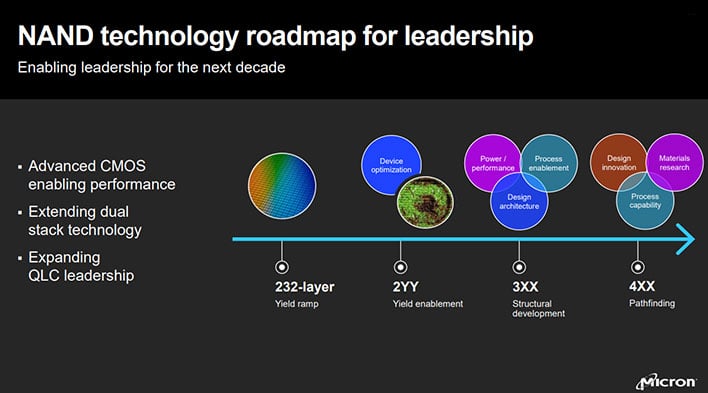 Looking further down the line, Micron at its Investor Day 2022 event also shared a roadmap to 500-layer NAND and beyond. Details are extremely sparse, though, as is information about the time frame. However, Micron did note that it's "focus going forwards is absolutely on extending our QLC [quad-level cell], or 4-bit per cell leadership path."