Intel's Ryan Shrout decided not to wait for CES to showcase a 12th Gen Intel Core i9-12900K system rocking a Samsung PM1743 PCIe 5.0 solid state drive achieving over 13GB/s in IOMeter, but why not showcase a pair of drives? The question was posed, and Shrout answered with another awesome bandwidth demo, this time achieving an eye-popping 28GB/s.

A few asked why we didn't show both of the PCIe 5.0 drives running at the same time. Fine @IanCutress here you go. Addressing them independently in IOmeter for a combined bandwidth over 28 GB/s!! https://t.co/107wlJ4wit pic.twitter.com/c8fecGkxli

That's quite fast, obviously. Or to quote the Spaceballs meme that someone posted in response, that is "Ludicrous speed, go!" Not everyone can take advantage of such high transfer speeds, but for those who can (especially within enterprise environments), this is a delightful development. The future of storage looks bright. 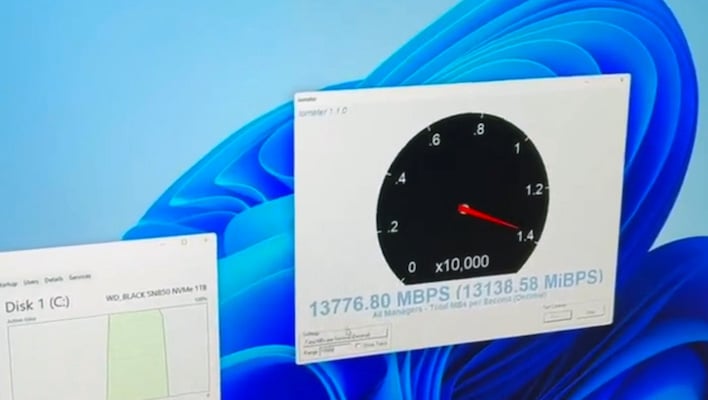 We knew PCIe 5 SSDs would be fast, but now we've got some confirmation. The new Samsung PM1743 PCIe 5 SSD we told you about last week is already in some folks’ hands, and its overall bandwidth and throughput are off the hook. In fact, one technology expert at Intel has been testing the new drive and clocked it at speeds of more than 13.7GB per second.

Chief Performance Strategist at Intel, Ryan Shrout has the Samsung PM1743 for demos to the press ahead of CES 2022. He was originally going to save his demo for live show demos in Las Vegas, but since Intel withdrew from a physical CES 2022 presence recently, Shrout decided to show it off early.

Shrout paired the SSD with a 12th-generation Intel Core i9-12900K Alder Lake system. It’s kitted out with an Asus Z690 motherboard and EVGA GeForce RTX 3080. Samsung provided him with an enterprise edition of the PM1743 PCIe 5 SSD, so what you’ll see in the video isn’t quite like what you’ll see from consumer versions when they eventually arrive.

The demo begins with what Shrout describes as standard top-of-the-line PCIe Gen 4 SSD. IOMeter shows the drive topping out at around 7GB/s. When he runs the test on the new Gen5 SSD, however, that speed almost doubles.

That falls in with expectations Samsung has already set. The manufacturer says the PM1743 should deliver read speeds up to 13GB/s, and write speeds of 6.6GB/s. Samsung also says power efficiency is improved to 608MB/s per watt, which is a 30 percent boost over PCIe 4 SSD devices.

Samsung will offer the PM1743 to consumer and enterprise customers with capacities ranging from 1.92TB all the way to 15.36TB. Both 2.5-inch and 3-inch form factors will allow its deployment into a wide variety of drive bays and enclosures.

The PM1743 SSD should start hitting store shelves in 2022. If TrendForce analysts are correct about SSD prices dropping soon, the new Gen5 SSD might even be affordably priced out the gate.