AMD is sitting on top of the world right now. The company is making a spirited run at NVIDIA with its Radeon RX 6000 series, and its newly launched Ryzen 5000 series powered by Zen 3 is giving Intel a wedgie. One of the questions AMD's good fortunes raises is, will Intel retake the performance crown? If so, when? Well, it might not be until 2023. Let's discuss.
The earliest Intel could leapfrog back in front of AMD in overall performance (multi-threaded, gaming, and practically everything else on the desktop) is with Rocket Lake, which is set to lift off in the first quarter of next year. Intel is claiming Rocket Lake will offer a double-digit gain in IPC (instructions per clock) performance, which would make things interesting.
After Rocket Lake comes Alder Lake, and the interesting about that architecture is that it take a hybrid approach, somewhat similar (but not exactly) to Arm's big.LITTLE philosophy. There are key differences, but the general takeaway is that it will blend power efficient cores with high performance cores in the same package, and do it on the desktop. Interesting stuff.
Then after that comes Meteor Lake, perhaps followed by Lunar Lake, depending on how far into the future you want to look. As it applies to Intel's future plans, the YouTube channel Moore's Law Is Dead posted a video covering a rash of alleged information.
It's a lot to cover and we won't take a deep dive into every last bit, but here are some claims about what is coming in the short-term...
So that is a broad overview, much of which is related to Intel's play in the server space. We wrote about a leak pertaining to AMD's EPYC 7713 processor earlier today, which is an unreleased Milan chip, and it still looks like AMD is in excellent shape there.
What I find more interesting (as a consumer) is the look ahead to Meteor Lake, and perhaps beyond. Here is a breakdown of the claims... 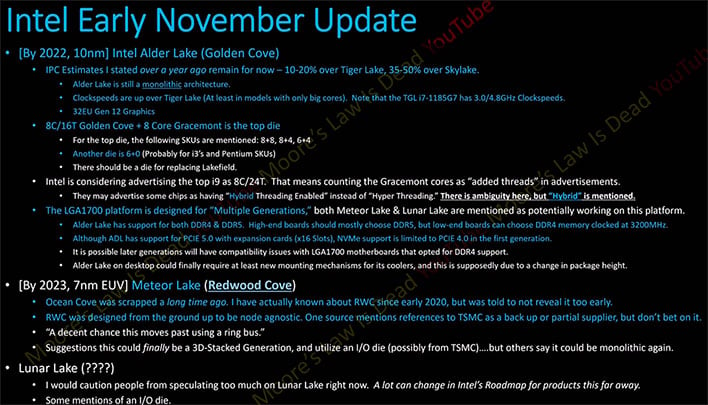 The text in blue is what the leaker feels around 90 percent confident in, while the white text is less reliable speculation. And if the information is accurate, Alder Lake could offer a 10-20 percent performance improvement over Tiger Lake, and up to a 50 percent performance jump over Skylake. It is also speculated that there could be a Core i9 variant with 8 cores and 24 threads.
While that is an odd arrangement, bear in mind that Alder Lake is a hybrid architecture, so there will not necessarily be twice as many threads as cores.
So what is this about Meteor Lake? This is when Intel will transition to a 7nm EUV node. Yes, AMD is already at 7nm, but it's not the same thing. This is why Intel's aging 14nm node is still competitive, having only just lost the overall performance crown to AMD with Zen 3 (and perhaps will take it back with Rocket Lake).
In any event, Meteor Lake is said be based on new Redwood Cove architecture designed from the ground up to be node agnostic. That means it could be manufactured at different places, including TSMC, which could be a partial supplier (maybe, anyway).
Interestingly, this is when Moore's Law Is Dead reckons Intel will catch up to AMD. If true, AMD will stay on top even when Rocket Lake arrives, and later Alder Lake, with Zen 3 and Zen 4. Additionally, Meteor Lake could end up using a fully 3D stacked design, and utilize an I/O die from an outside fab (like TSMC), but take that with a grain of salt.
Take all of this with a lot of salt, actually. Much of its leaked info and speculation. Additionally, roadmaps are static things—they can change, pivot, or even blow up altogether. We'll just have to wait and see.