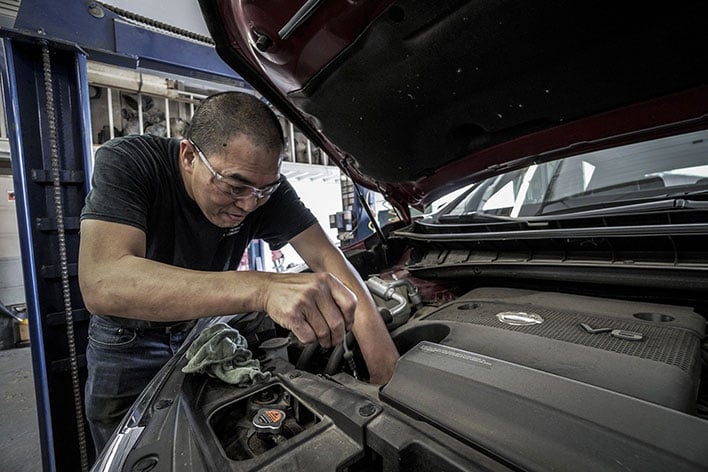 Fixing automobiles has become a more complex art over the years, because of the increased reliance on computers and electronics. And that trend will only continue as more self-driving cars and smarter vehicles in general hit the pavement. So kudos to Massachusetts residents who voted to pass a crucial expansion to the state's right to repair law.
Here in the afternoon of November 4, we are still awaiting final results of the presidential election. But not so for "Question 1" on the ballot in Massachusetts, otherwise known as "Amend Right to Repair Law," which effectively prevents automakers from withholding critical diagnostic and repair data tools and software from do-it-yourself (DIY) and independent mechanics.
As of this moment, 75 percent of more than 3 million residents voted "Yes" on Question 1, with nearly 92 percent of the votes already tallied, according to the latest AP data. So it passed, in other words (or officially will very soon).
"Modern cars can send maintenance information directly to the manufacturers, cutting out local mechanics. Question 1 makes sure that consumers can continue to fix their own vehicles, or get them fixed at the shop of their choice," iFixIt CEO Kyle Wiens said in a statement.
What this really boils down to is giving consumers more choice in getting their high-tech automobiles repaired, and closing a loophole that has existed for dealerships to use proprietary tools (and potentially charge higher prices as a result).

Massachusetts blazed a trail in 2013 by being the first state to put into law a right-to-repair measure for cars, which made it so automakers would have to supply independent repair shops with the same diagnostic tools that they provide dealerships. So in essence, this enabled DIY and independent repair shops to be able to extract diagnostic codes from vehicles, to know what is going on and what might be causing a problem.

Since then, however, data collected wirelessly—or telematic data—has risen in prominence. And interestingly, the law specifically excluded this type of data. As defined in the original legislation, telematic services could include "automatic airbag deployment and crash notification, remote diagnostics, navigation, stolen vehicle location, remote door unlock, transmitting emergency and vehicle location information to public safety answering points, and any other service integrating vehicle location technology and wireless communications."
Question 1 on the ballot expands the right-to-repair legislation to include telematic data, thereby preventing dealerships from effectively locking car owners and independent repair shops out of crucial diagnostics through wireless software that only they have access to. And with cars becoming much smarter and adopting wireless technologies, this is an important win.
The campaign against Question 1 argued that this would be prevent a cybersecurity threat. But in an op-ed in the Boston Herald, security experts basically said that is nonsense.
"In our professional opinions, this small expansion to the state’s right to repair law in no way increases the risk of identity theft, cyber stalking or vehicle hacking. If passed, Question 1 would close a loophole in a Massachusetts law that requires automakers to make diagnostic and repair data accessible to vehicle owners and independent repair shops," the researchers said.
They also called advertisements to the contrary "scare-mercials," saying this type of data transmission might tell a car owner why the Check Engine light is on, but "won't open your garage door or let a cyber stalker follow you around town."
And now it's a moot point. Good job, Massachusetts.