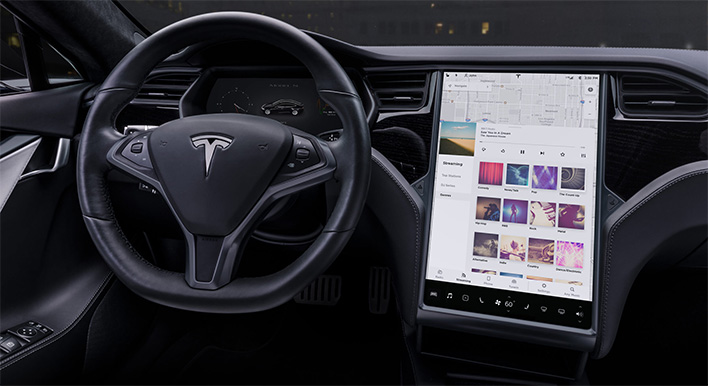 You better look twice before crossing an intersection (in a car or especially on foot), because Tesla's fleet of self-driving vehicles have a new capability—the latest software update enables the autonomous cars to drive through a green light in some situations, without explicit confirmation from a flesh and blood driver. Let's hope it works as advertised.
The feature is called "Traffic Light and Stop Sign Control," and it is being rolled out to vehicles through the newly released Autopilot 2020.40.0.1 update, along with a few other features added to the mix, like the addition of an optional PIN to protect the contents of the glove box, the ability to set a priority for a particular Bluetooth device, and Speed Assist improvements.
However, the ability to cruise through a green light is the only new feature in this update that is classified as beta.
"As you approach a green traffic light, in some situations where there is a straight path through the intersection, the Traffic Light and Stop Sign Control feature may no longer require explicit driver confirmation. If this occurs, the stop line in the driving visualization will turn green to indicate that the car will continue through an intersection. Confirmation is still required if your car is already stopped at the light when it turns green," Tesla explains.
Before this update, Autopilot did not have this capability, except in situations where the car might be behind a lead vehicle. In those instances, Tesla, which has waged a war against hackers unlocking paid performance upgrades, this past June added the ability to have Autopilot go through a green light as well, so long as the lead vehicle was not in a turn lane. Now there is no such requirement in place.
Tesla notes the expanded capability will not allow Autopilot to navigate a turn or attempt to turn through an intersection, at least for now. For the time being, it can only go straight through automatically. And if the car is stopped at an intersection, it will not accelerate on its own when the light turns from red to green.

"Over time, as we continue to learn from the fleet, we expect that it will control more naturally," Tesla says.
Stay safe out there, folks.