For a fair while now, we've been talking about Intel's upcoming Arc Alchemist GPUs as comprising two chips: a larger, 512-EU processor primarily intended for high-end desktop parts, and a smaller 128-EU chip meant for entry-level and mobile products. These processors have been known as DG2-512 and DG2-128 for some time.


Despite Intel's own divulgence on the matter, there are still a fair few question marks surrounding Alchemist. As it turns out, there may actually even be more than we thought. "Retired" but clearly-still-attentive leaker Komachi Ensaka (@KOMACHI_ENSAKA on Twitter) spotted a mention of a third chip in Intel's open-source "igsc" driver component. That's the firmware update utility for Intel's graphics controllers.


Clearly mentioned in the source along with the previously-known DG2-SOC1 and DG2-SOC2 is DG2-SOC3. It comes between the other two and is mentioned as "GSC_IFWI_TAG_256_SKU_BIT". Based on the tags for the other two chips, we can reasonably infer that this is a 256-EU Arc Alchemist part. 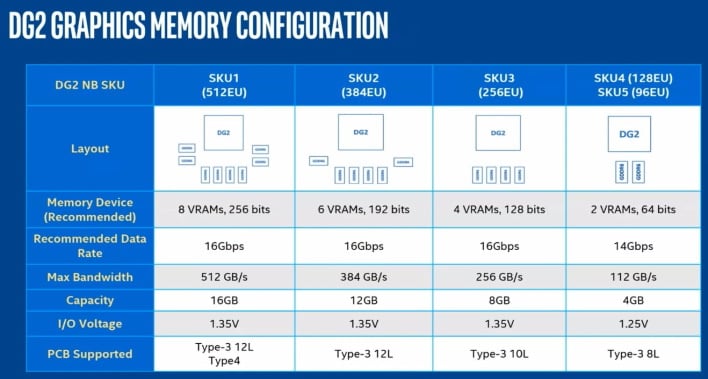 
One of the expected Alchemist products is in fact a 256-EU SKU, but most enthusiasts expected Intel to make these products by paring down and binning the 512-EU parts. Selling a chip originally intended to be twice as large with half its capacity disabled isn't unheard-of in GPUs, but it would probably mean pretty poor margins for Intel on such a product.

Now it seems likely that those mid-range Alchemist cards might actually be carrying a separate chip altogether. Intel may have found that its yields on the SOC1 (aka DG2-512) chip were better than expected, or some beancounter may have gotten nervous about chopping off half of an SOC1 to make a 256-EU SKU3. Alternatively, SOC3 may not even exist and the entry in the driver could be an artifact of earlier plans.

We could speculate for days on Intel's rationale for such a decision, but ultimately it's likely to come down to profits, one way or the other. In any case, Intel doesn't have much time left before it's expected to reveal the whole Alchemist lineup to the world, so we'll know the whole story sooner than later.