Intel has ambitious plans for its entry into the discrete GPU market, which will get underway with Alchemist, its first offering under the Intel Arc umbrella. Otherwise known as a DG2 part (and Xe-HPG, for anyone wanting to juggle multiple nomenclatures), it will come out of the gate swinging at AMD and NVIDIA next year, but how strong will it punch? A supposedly leaked slide offers up a potential answer.
The slide, labeled "Desktop DG2 Product SKUs," popped up on Baidu and shows the proposed DG2 lineup in comparison to current products offered by AMD and NVIDIA at various price points. One thing that stands out, if the slide is to be believed, is that Intel aims to cover the more affordable mainstream sectors, on up to the lower end of the enthusiast tier.
Have a look... 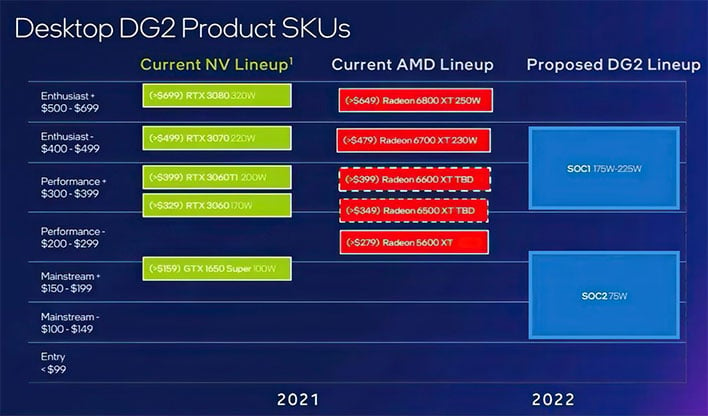 As labeled by Intel, both AMD and NVIDIA compete at the performance level and up with their current generation RDNA 2 and Ampere architectures. This is where "SOC1" products will be positioned, according to the supposed desktop DG2 slide, with Intel's fastest part set to offer performance on the level of a GeForce RTX 3070 and Radeon RX 6700 XT.
This is roughly in line with previous rumors, which pegged what we now know as Alchemist offering GeForce RTX 3070 Ti-level performance. Intel may not quite get there initially, if the slide is accurate, and instead will target performance tiers spanning the GeForce RTX 3060, GeForce RTX 3060 Ti, and GeForce RTX 3070, as well as AMD's Radeon RX 6500 XT (which doesn't exist), Radeon RX 6600 XT, and Radeon RX 6700 XT.
The inclusion of a Radeon RX 6500 XT raises a red flag to the leak's legitimacy. However, this could be an older slide, with Intel anticipating there being such a SKU in the works. This is supported by the "TBD" status of the power envelope for the Radeon RX 6600 XT—it suggests Intel didn't know what the power envelope would be because, at whatever time this was put together, the Radeon RX 6600 XT had not been released.
Or it could be a bunch of nonsense, there's just no way to know for sure. If it is real, though, the large SOC1 block may represent multiple graphics cards, including what will be Intel's flagship DG2-512 (with 512 execution units), or it could indicate that Intel's top card is intended to compete with Ampere and RDNA 2 cards in the 175W to 225W range.
Going back to the mainstream segment, the block labeled SOC2 highlights a 75W product offering, or multiple products. Whether it is one or more cards, Intel will be filling in a hole left by AMD and NVIDIA with their current generation lineup, that hole being the $100 to $200 sector. And if the slide is to be believed, performance will top out at around the same level as a GeForce GTX 1650 Super.
Of course, plans change and if this is indeed an older slide, it could be outdated by the time Alchemist arrives. Whatever the case might be, Intel is confident it will be able to throw down with the competition. Intel CEO Pat Gelsinger alluded to such during a recent interview saying, "We have our GPU architecture where we're gonna start being in a position to really put pressure on NVIDIA for the first time in forever." Time will tell.