We brought you news late last week that Intel's upcoming DG2 (Xe-HPG) discrete graphics card family could launch for consumers next year at CES 2022. Intel's foray into the enthusiast market for graphics cards is highly anticipated, and continual leaks have kept interest high.

The latest leak comes via a Geekbench entry that paired the DG2 discrete graphics card with a Rocket Lake-based Core i5-11400T processor using an ASUS TUF Gaming B560M-Plus motherboard. This DG2 sample has 128 execution units, which would give a total of 1,024 cores. Additionally, this engineering sample lists its maximum clock speed at 2.2GHz, while 4GB of GDDR6 memory runs on a [expected] 64-bit memory bus.

Given the OpenCL score of 13,710, we can see that Intel still has quite a lot of work to do on the driver side to improve the performance of its GPUs compared to AMD and NVIDIA rivals. However, that score is comparable to an AMD Radeon RX 550 or NVIDIA GeForce GTX 660 Ti, which doesn't exactly make our pulse race. 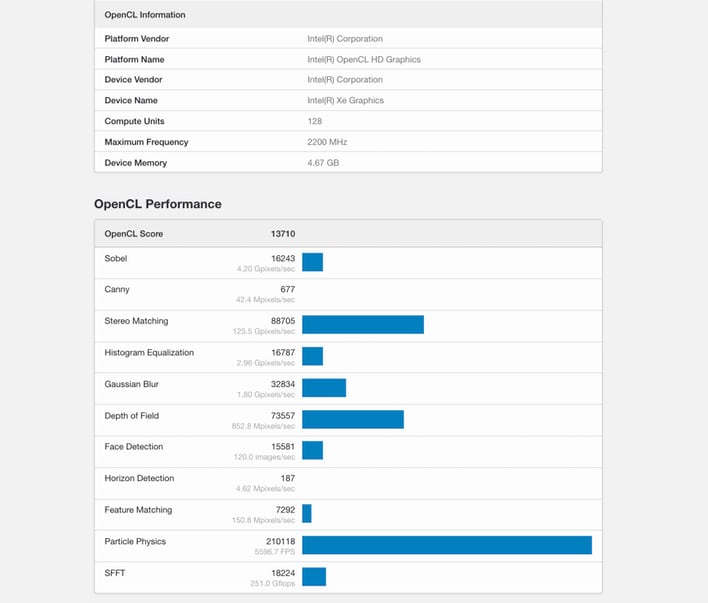 The 128-EU version of the DG2 likely isn't going to raise the pulse of gamers out there, as it is an entry-level SKU that won't offer competitive performance to the RDNA 2- or Ampere-based GPUs that are currently making the rounds. For that, we'll have to wait for the flagship DG2, which offers 512 EUs (4,096 cores). In addition, this GPU will likely be paired with up to 16GB of GDDR6 memory.

The flagship DG2 should put up more respectable numbers, with recent rumors suggesting that it could offer performance comparable to the GeForce RTX 3070 Ti. As we mentioned before, if the DG2 (512 EU) can match the GeForce RTX 3070 Ti on performance while undercutting that GPU's $599 price point, Intel could have a winner in this segment. We don't expect Intel to come out of the game swinging at the likes of the GeForce RTX 3080 Ti and Radeon RX 6900 XT, so making a grand showing in the "heart" of the enthusiast segment might make an even better impression.

We're hoping that Intel will give us concrete specifications and release information on the DG2/XE-HPG family at its special hardware event on October 27th. The company is also rumored to launch its 12th generation Alder Lake processors on that date.