Lenovo is making a splash at Mobile World Congress with a bevy announcements, one of the more interesting of which is the ThinkPad X13s. What makes this ThinkPad stand out from all the rest? Developed in collaboration with Qualcomm and Microsoft, this is the world's first laptop powered by the Snapdragon 8cx Gen 3 compute platform, running up to Windows 11 Pro.
The Snapdragon 8cx Gen 3 is an SoC built on a 5-nanometer manufacturing process. When Qualcomm announced it a couple of months ago, it touted new Prime cores offering up to 85 percent more CPU performance compared to the previous generation in multi-threaded workloads, up to 40 percent better single-threaded performance, and up to 60 percent faster GPU performance.

Lenovo's ThinkPad X13s wraps the chipset in a super thin and light package measuring 11.76 x 8.13 x 0.53 inches and weighing just 2.35 pounds. It's made from 90 percent "certified" recycled magnesium in the top and bottom covers, and 97 percent PCC plastic in the printed circuit board cover and battery frame. From the renders and lifestyle photos we've seen, the ThinkPad X13s certainly carries itself with premium swagger.

The ThinkPad X13s also wields a low power 13.3-inch IPS display with a WUXGA resolution (16:10 aspect ratio). There are a few different specific options, including touch and low blue light versions. Other core specifications include up to 32GB of LPDDR4x soldered RAM (dual-channel), up to 1TB of PCIe storage, 5MP RGB and IR cameras, a Dolby audio system with a pair of user-facing speakers, two USB 3.2 Gen2 Type-C ports, a SIM slot, and a spill resistant backlit keyboard.
Those cameras, by the way, are nestled into a communications bar at the top with AI-based auto-framing and triple-array microphones. Lenovo touts intelligent noise suppression during conference calls, plus the Snapdragon 8cx Gen 3 offers up a Computer Vision processor with several nifty tricks of its own, like smarter human presence detection. 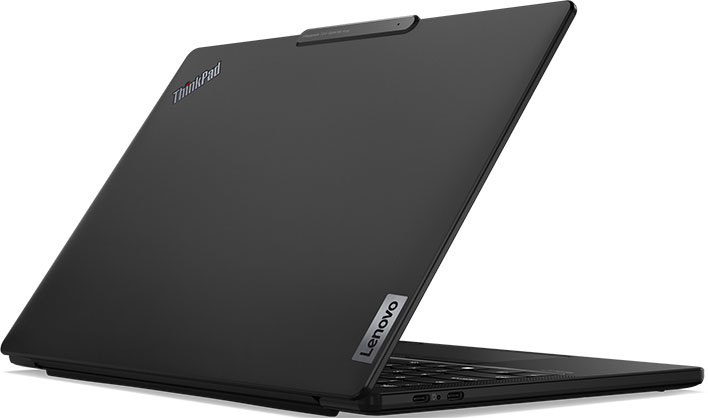 As an always-on, always-connected laptop, connectivity and battery life are paramount to the experience. Regarding the former, the ThinkPad X13s offers seamless switching between Wi-Fi 6/6E and 5G (mmWave and Sub-6GHz) and 4G LTE. And for the latter, a 49.5 Wh battery is rated to deliver up to 28 hours of run time (video playback).
The ThinkPad X13s will be available in May starting at $1,099.