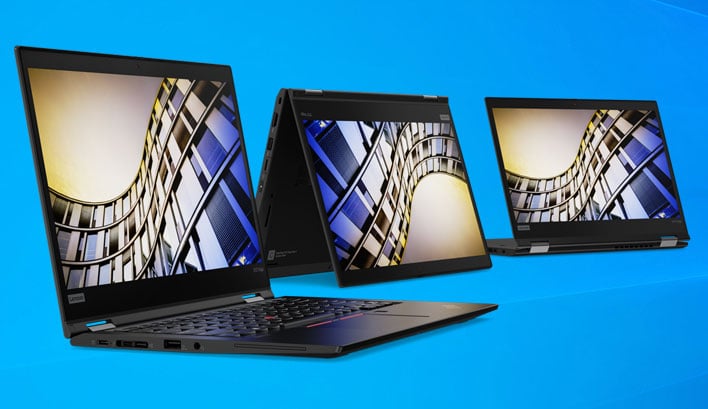 It has been nearly two weeks since Microsoft released the May 2020 Update for Windows 10 the general public, and on my main desktop, I still get a message saying it is not yet available. That is fine by me, because I'd rather Microsoft work the post-release kinks out first. It seems more of them come light by the day, the latest being several known compatibility issues with certain Lenovo laptops.
This is exactly why Microsoft is taking a staggered approach to the roll out—it gives Microsoft, its hardware partners, and Windows users at large a chance to spot issues and ultimately correct them before they affect more PCs.
Even still, some issues slip past the radar. In other cases, a user might be tempted to force an upgrade using Microsoft's Windows Media Creation Tool, only to run into problems afterwards. As it pertains to Lenovo, the company identified specific issues affecting various ThinkPad laptops.

According to Lenovo, the ThinkPad E570p and ThinkPad L570 both are prone an error message that reads, "Failed to load Apoint.DLL, Alps Pointing device application has stopped" after applying the May 2020 Update.
To solve the problem, Lenovo says to go into the Device Manager (Windows key + X), expand the arrow before Mice and other pointing devices, select and right-click ThinkUltraNav, select Update driver, then restart the laptop.

On the ThnkPad X395, users may find that the Movies & TV application in Windows 10 will display a green border when resizing the window, after upgrading Windows 10 to version 2004 (May 2020 Update). Lenovo says this is a limitation of the AMD driver. There is nothing a user can do except wait for an updated driver release, which is expected on or before June 15, 2020.

Lenovo also identified a system recover issue with its ThinkPad X1 Tablet X3 that is related to the May 2020 Update. On this system, the F11 hotkey sometimes does not work after a system recover. Lenovo says an update scheduled for June 29, 2020 will fix the issue. In the meantime, affected users can go to Control Panel > System and Security > Lenovo > Keyboard Manager.

Finally, Lenovo has identified a bug in the Windows 10 May 2020 Update that can cause ThinkPad P70 laptops to experience the dreaded blue screen of death. This happens when coming out of sleep or hibernate mode
Lenovo is still investigating the issue, but thinks it is related to the BIOS. Those affected are encouraged to roll back to the previous version of Windows (1909) for the time being. This can be accomplished by going to Windows Settings > Update & Security > Recovery, then clicking on Get Started under Go back to the previous version of Windows 10. Then follow the prompts.