Foldable phones are a trend in smartphones that continue to see improvements and advances in technology. In a post on Weibo, Lenovo executive Chen Jin revealed plans of a third generation Motorola Razr foldable smartphone.

The first generation Motorola Razr smartphone was launched in 2019 alongside other first gen foldable phones. Since then companies like Samsung, Huawei, and Honor have continued the foldable trend. It was Samsung's Galaxy Z Flip, however, that challenged the Razr phone and seemed to steal some of its fanfare. But fans of the Razr phone can rest assured that the company is not throwing in the towel and plans on making improvements with its third iteration of the smartphone.

Lenovo executive Chen Ji was spotted on Weibo recently talking about preparing for the third generation Razr foldable smartphone. The exec mentioned the upcoming Razr as having more advanced chip computing power, better man-machine interface, and a more atmospheric appearance. The post also reminisced about being the first in the industry with a vertical folding screen and leading the industry in innovation with its star orbit hinge technology. At the close of the post, Ji also hints that the phone will launch in China first. 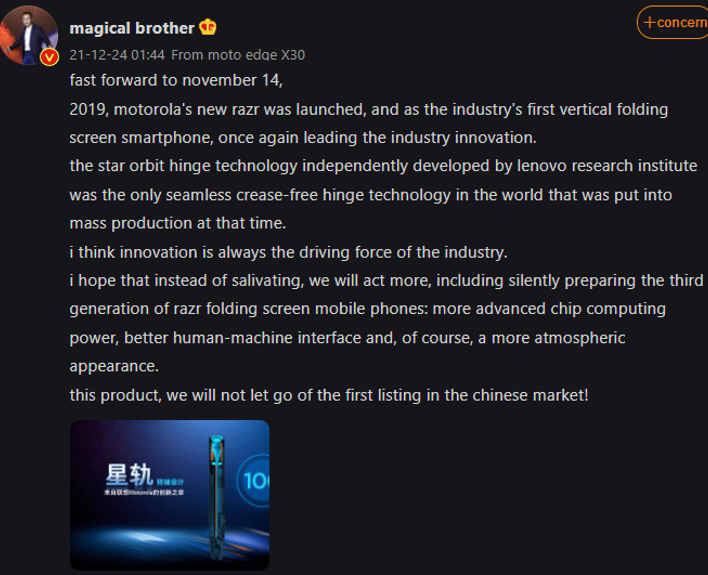 The foldable arena is getting crowded these days as the technology has improved since its first generation. Honor recently announced its own foldable phone that is set to debut at CES 2022, the Magic V. Samsung has made its own contributions with its Galaxy Fold and Galaxy Flip. Other companies such as Huawei, Oppo, and Xiaomi have also provided its customers with foldable options. The trend of folding up your phone does not seem to be losing steam.

So far it seems the two directions that companies are trying to take the foldable design are mainly for those that either desire a more compact phone, or those who want more of a small tablet in their pocket. The compact design of the first two versions of the Razr gave customers a bit of nostalgia with its retro clamshell appearance. The fact that Ji mentioned the appearance of the phone in his post may mean that the company is looking to move away a bit from the retro design and more toward a futuristic one instead. Lenovo could look to add new features to the outer screen, making it have the "more atmospheric appearance". But that is just speculation at this point.

Even though the technology of foldable phones has improved, there is still much room for further advancements. Owners of foldable devices still have complaints about how the folding screens hold up over time. Those who own devices with compact designs like the Razr often complain about the size of the battery. Others note that most do not have the flagship power or camera setup of other premium devices within the same price range. Fans of the design are certainly hoping that the next generation of foldable phones will bring improvements in these areas as well as bringing down the cost of owning one.