Although it may seem hard to believe, we've experienced the performance blessings of PCIe 4.0-based SSDs for over two years. Performance has ramped to the point that we've currently seeing sequential write and read speeds that are twice their PCIe 3.0-based predecessors. For example, the T-Force Cardea A440 Pro Special Series can hit sequential read/write speeds of 7,400 MB/sec and 7,000 MB/sec, respectively. 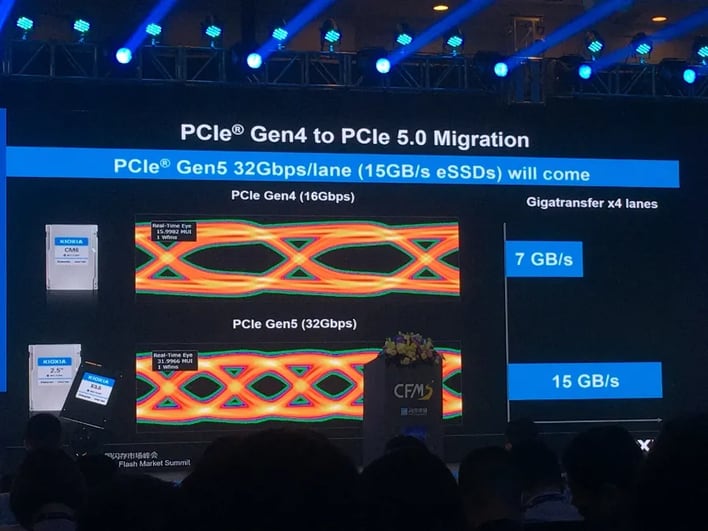 Kioxia's first PCIe 5.0 x4 CD7-Series SSDs will use a 2.5-inch EDSFF E3S form-factor. These SSDs will be available with an 8-channel controller for data center applications or 16-channel controller for enterprise-class deployments in 1.6GB to 30TB capacities. The company will later produce CD7-Series SSDs using a standard PCIe 5.0 NVMe interface more familiar to consumers. 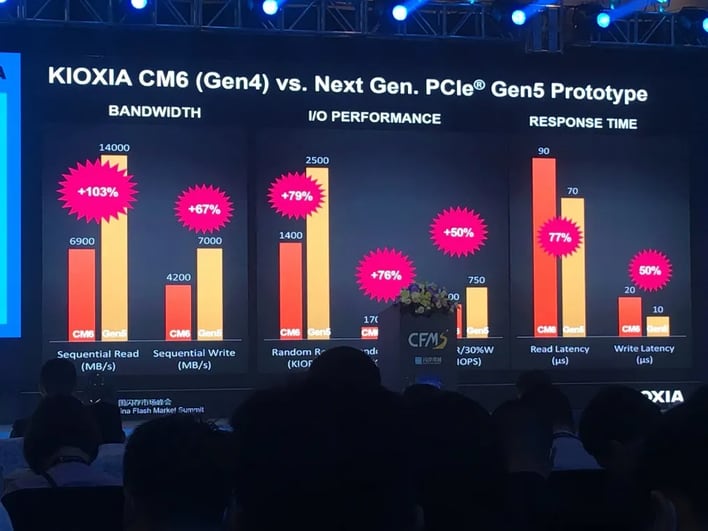 Interestingly, the sequential writes are nothing to write home about, coming in at "only" 7,000 MB/sec. That level of performance is already attainable by the fastest PCIe 4.0 SSDs. For comparison, Marvell said that its Bravera SC5 PCIe 5.0 SSD controller can deliver up to 14 GB/sec reads and 9 GB/sec writes, respectively.

We must remember that Kioxia is showcasing a prototype SSD, and performance will only improve with subsequent generations. "Today, Moore's Law is technically dead in both the CPU and DRAM, but it still works at the PCIe clock rate," said Kioxia at the summit. "2015 [was] be the third generation of PCIe, 2019 is the fourth generation, and 2022 will be the fifth generation. Even if people spend a lot of money, they can't double CPU nodes to improve system performance, but buying Gen5 SSD instead of Gen4 SSD can greatly improve system performance."

TrendForce said in late July that first-generation PCIe 5.0 SSDs would land in Q2 or Q3 2022. However, Kioxia reckons that its first PCIe 5.0 SSDs will ship in Q4 2021 if all goes according to plan.