Up until today, there had not existed a solid state driver controller that takes advantage of the PCI Express 5.0 specification. That just changed, however, with Marvell's introduction of the Bravera SC5, the industry's first SSD controller to support PCIe 5.0 and NVMe 1.4b, to potentially double the performance of PCIe 4.0 SSDs.
That claim comes by way of the bandwidth that PCIe 5.0 affords. In terms of raw speed, PCIe 5.0 doubles the transfer rate from PCIe 4.0 from 16GT/s to 32GT/s (that's GigaTransfers per second). That translates to around 4GB/s per lane, so in a x16 configuration, we're looking at around 64GB/s of unidirectional bandwidth, or 128GB/s.
No consumer platform supports PCIe 5.0 right now—Intel only just recently got around to supporting PCIe 4.0 on the desktop with Rocket Lake. That will change when Alder Lake-S arrives later this year, while rumor has it AMD's Zen 4 architecture will stick with PCIe 4.0 for another round. 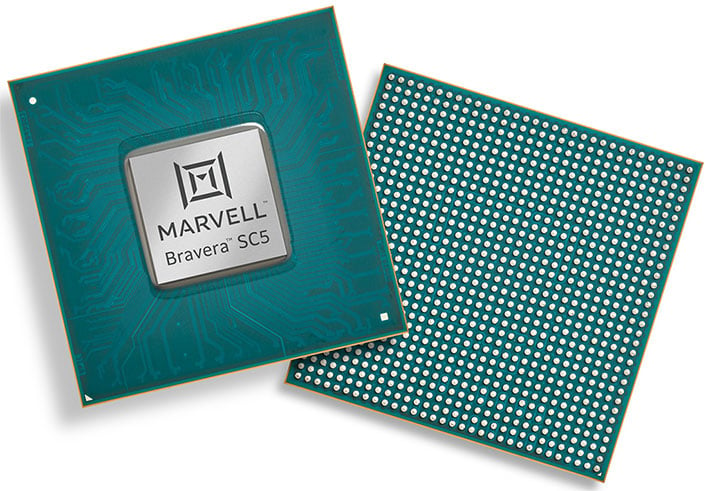 Marvell is not targeting home consumers with the Bravera SC5 anyway. This is a play for data center dollars, and to address the need for higher speed and bandwidth solutions as cloud workloads continue to expand. The way Marvell sees it, the Bravera SC5 is positioned to be the foundation for data centers to power ultra-lower latency, real-time applications.
"Bravera SC5 SSD controllers are first to market with innovative data center features that extend Marvell's flash storage technology leadership," said Thad Omura, vice president of marketing, Flash Business Unit at Marvell. "We're working with the entire ecosystem to enable SSD vendors and Do-It-Yourself cloud service providers to deploy the most advanced flash storage solutions."
Marvell is offering two variants, including an 8-channel model (MV-SS1331) and a 16-channel model (MV-SS1333). Both are capable of driving 14GB/s of sequential read throughput and 9GB/s of sequential write throughput, along with random read and write speeds of 2 million IOPs and 1 million IOPs, respectively.
The company is also touting support for multiple usage models, such as SEF, ZNS, Open Channel, and more, all without having to make hardware changes. As such, there is flexibility to repurpose the underlying hardware when migrating to a next-gen workload, Marvell says.
Marvell rates the max controller power of the 8-channel at 8.7W and the 16-channel model at 9.8W.  And it's worth mentioning that Marvell is touting the Bravera SC5 as being the first to enable 16 NAND channels on EDSFF E1.S form factor devices.
The new controllers are sampling to select customers now. As such, Marvell has given itself a head start over the competition, such as Silicon Motion, Phison, and FADU, all of which make SSD controllers for the data center as well.