Kioxia's CD7 Series PCIe 5.0 SSDs To Rock Up To 7.68TB Of Dense Storage For Data Centers

Kioxia announced a couple of treats for data center clients in need of expansive storage options. The first is the introduction of the first production-ready 9.5mm XD6 Series Enterprise and Data Center Standard Form Factor (EDSFF) E1.S solid state drives, and the second is the unveiling of its CD7 Series drives designed with PCI Express 5.0 technology, for what amounts to denser storage with better lane management. More on that in a moment.
Let's start with the XD6 Series. Kioxia actually first mentioned its XD6 drives towards the end of last year, as the industry's first EDSFF E1.S SSDs. It's taken a bit find their way to market, but now several months later, they're being deployed for servers in cloud and hyperscale cloud data centers.
The form factor is half the story here. It's intended to replace M.2 in the data center, the upshot being greater density while maintaining performance, reliability, and thermal management perks. Kioxia's EDSFF E1.S SSDs are also hot-pluggable, which represents another benefit over M.2 drives.
Kioxia's offering these drives in 1.92TB and 3.84TB capacities. They're compliant to NVMe 1.3c and PCIe 4.0 specifications and feature 3D BiCS Flash memory. The drives are intended for large-scale deployments in hyperscale data centers.

Arguably the more exciting news is the introduction of the industry's first EDSFF E3.S SSDs with PCIe 5.0. Unlike the XD6 series, these are actually intended to replace 2.5-inch SSDs in data centers, with several key advantages. The big one of course is PCIe 5.0.
It's really about better lane management, though (or better use of lanes), rather than raw speed. Back in September, Kioxia teased eventually hitting sequential read speeds of up to 14,000MB/s on a next-gen SSD prototype. That's not what this is, and instead Kioxia's CD7 Series is rated to deliver sequential read throughput of up to 6,450MB/s, along with 1,050K random read IOPS.
Those are more in line with PCIe 4.0, though it's a bit of an apples and oranges comparison, given the form factor and application (these aren't M.2 drives).
"Based on Kioxia’s innovative fourth generation BiCS Flash 3D flash memory technology, the CD7 Series supports x4 PCIe lanes, but is optimized for PCIe Gen5x2 performance, which is similar to PCIe Gen4x4 performance, saving two valuable PCIe lanes for additional device connections," Kioxia explains. 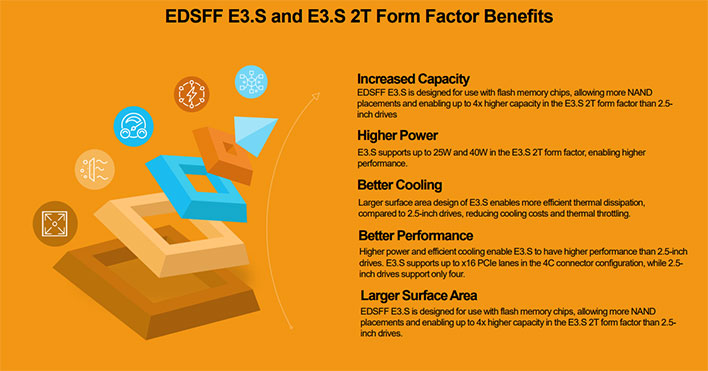 The form factor is the big play here, with Kioxia touting improved airflow and thermals, better signal integrity, and bigger capacity options. Another perks is that EDSFF standardizes status LEDs on the actual drive, so there's no need to plop them on the driver carriers.
E3.S supports to up 25W and 40W in teh E3.S 2T form factor, to ultimately enable higher performance (than 2.5-inch drives), It supports up to x16 PCIe lanes in the 4C connector configuration, up from four in 2.5-inch drives, and in theory these drives should throttle less often due to more efficient thermal dissipation. This can also reduce cooling costs, Kioxia says.
A roundup of the key features includes...
Kioxia didn't talk about pricing (not that it matters for consumers), but did say it has begun sampling its CD7 Series to select OEM customers.