Intel Optane holds a unique position in the PC computing space as a high-speed memory that complements system DRAM. The non-volatile memory can accelerate commonly performed tasks and improve overall system responsiveness (including booting) even if you already have a high-speed PCIe 4.0 SSD installed.

Kioxia is looking to tap into this market with its new FL6 series of SSDs, which it classifies as Storage Class Memory (SCM). The FL6 SSDs are geared towards the enterprise market and are available in dual-port and PCIe 4.0 NVMe 1.4 configurations. 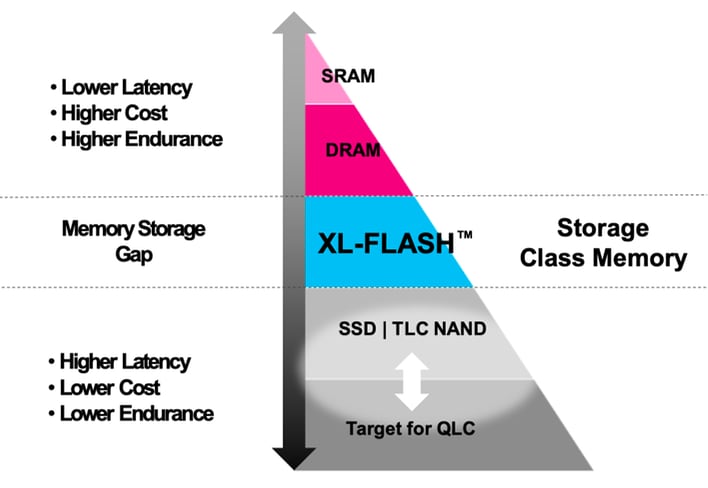 At the heart of the FL6 series is what Kioxia calls XL-Flash-SCM, which is based on 1-bit-per-cell SLC BiCS Flash. The high-speed storage operates in a middle ground between TLC-based SSD storage and high-speed (volatile) DRAM found in typical computing systems. Kioxia says that the tiered operational design of FL6 offers a cost-effective solution for companies that want to improve system performance without the high cost of large amounts of DRAM.

According to Kioxia, the FL6 series is suitable for 60 DWPD endurance across 800GB to 3TB storage capacities and offers enterprise-grade reliability at 2.5 million hours MTBF.

Given that NAND technology is at the heart of FL6 SSDs, we expect pricing to be far more attractive than Optane, which uses more exotic 3D XPoint memory technology to achieve its performance goals. Speaking of performance, Kioxia interestingly has not provided any performance figures for its FL6 series, which would have allowed us to offer some direct comparisons with Optane. Unfortunately, pricing is also a mystery, for now, so we'll have to wait for those details to come down the pipeline as Kioxia gets closer to launch.

The FL6 Series SSDs are currently sampling to Kioxia's customers and industry partners. However, a timeline for full-scale production hasn't not yet been provided.